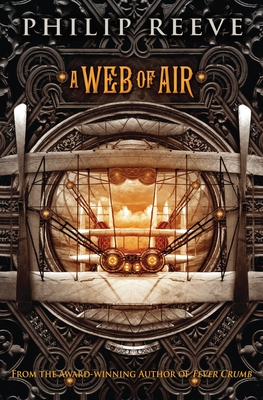 A Web of Air (The Fever Crumb Trilogy, Book 2) (Paperback)

Called "imaginative, inventive, and exciting" in a starred review from Kirkus, the second adventure in the Fever Crumb trilogy is now in paperback.
Two years ago, Fever Crumb escaped the war-torn city of London in a traveling theater. Now, she arrives in the extraordinary city of Mayda, where buildings ascend the cliffs on funicular rails, and a mysterious recluse is building a machine that can fly. Fever is the engineer he needs -- but ruthless enemies will kill to possess their secrets.

In this gripping sequel to Fever Crumb, master storyteller Philip Reeve creates a riveting story that is unforgettable and delightful at every fast-paced, breathless turn.

Philip Reeve is the bestselling author of the Mortal Engines quartet, which is now a major motion picture, and the award-winning Fever Crumb series. His other books include the highly acclaimed Here Lies Arthur and No Such Thing As Dragons. He lives in England with his wife and son. Visit him online at philip-reeve.com.

Praise For A Web of Air (The Fever Crumb Trilogy, Book 2)…

Praise for A WEB OF AIR, Book 2 in the Fever Crumb Trilogy

Praise for FEVER CRUMB, Book 1 in the Fever Crumb Trilogy

* "A must for any fantasy collection."
--School Library Journal, starred review