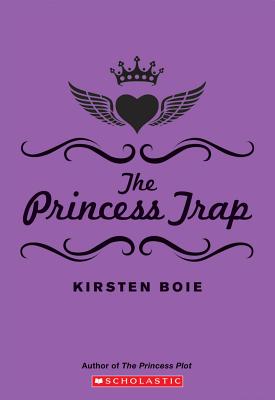 She's a royal on the run, as the PLOT thickens!

Life as a princess = a dream come true, right? Girl, please! Between palace rules, a mean queen-bee roomie at her posh boarding school, the ever-present paparazzi -- and, BTW, her unrequited crushing on Jonas -- Jenna feels superstressed, and finds herself wishing she were a plain old nobody again. Which is why she tries to run away . . . only to get trapped in a scheme to overthrow her uncle, the king!

Suddenly -- seriously? -- Jenna must stop a civil war. When all she really wants is her first kiss!

The charming sequel to THE PRINCESS PLOT!

Praise For The Princess Trap…

Praise for the PRINCESS PLOT series:

"Engaging, clever, quick-paced -- and well stocked with royals! Boie shows why she's such a popular novelist in Germany. Jenna will put readers firmly on her side as she escapes her captors, meets the real princess, and discovers some outstanding facts about her own hidden background....Boie's US debut carries a full load of reader appeal." -- Kirkus Reviews

"A fun, attention-keeping read. For readers who dream of being a royal or singlehandedly saving an entire country from ruin, Boie's story will hit the spot." -- Publishers Weekly

"Well crafted, intricate, and suspenseful. For readers who want more from their princesses than sumptuous clothes and first kisses." -- BCCB

"One part political drama, one part mystery, and one part fairy tale, all included in a very fun read." -- TeensReadToo.com

KIRSTEN BOIE is the recipient of Germany's prestigious Jungen Pris and the bestselling author of several children's books. THE PRINCESS TRAP is the sequel to THE PRINCESS PLOT, her first novel to be published in English. She lives in Hamburg.
Loading...
or
Not Currently Available for Direct Purchase