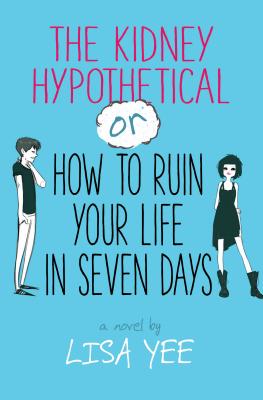 Or How to Ruin Your Life in Seven Days

Lisa Yee gives us her most fascinating flawed genius since Millicent Min.Higgs Boson Bing has seven days left before his perfect high school career is completed. Then it's on to Harvard to fulfill the fantasy portrait of success that he and his parents have cultivated for the past four years. Four years of academic achievement. Four years of debate championships. Two years of dating the most popular girl in school. It was, literally, everything his parents could have wanted. Everything they wanted for Higgs's older brother, Jeffrey, in fact. But something's not right. And when Higgs's girlfriend presents him with a seemingly innocent hypothetical question about whether or not he'd give her a kidney... the exposed fault lines reach straight down to the foundations of his life.

Praise For The Kidney Hypothetical: Or How to Ruin Your Life in Seven Days…

Praise for The Kidney Hypothetical "As Higgs's life unravels, every single one of his accepted beliefs has to be re-examined. And the miracle of this novel -- the wonderful, hilarious miracle of this novel -- is that Higgs actually does this. In a culture that insists that nothing matters more than appearance, Higgs actually looks at himself deeply and (and here is the killer in this novel) honestly." -- Gary Schmidt, author of The Wednesday Wars and Okay for Now"I love Lisa Yee's writing! You read along, smiling and chortling all the way, and then WHAM! she hits you in the heart. Watch out Higgs Boson, you're a Lisa Yee character. You've got seven days -- seven days to shed who you think you should be, and become the person you're meant to be." -- Amy Timberlake, author of One Came Home"Lisa Yee has written the best worst week of school ever. Just when you think Higgs Boson Bing's life can't get any worse, it does, in increasingly funny and poignant ways." -- Emily Ecton, author of Project Jackalope"Lisa Yee is one of those people everybody loves. At any moment, she can say something witty, completely off-the-wall wacky, or shockingly deep. Reading The Kidney Hypothetical was exactly like hanging out with Lisa -- wildly entertaining, emotionally affecting, and over far too soon." -- Jordan Sonnenblick, author of Drums, Girls & Dangerous Pie"Lisa asks what it means to live an authentic life, and she does so brilliantly with humor, pathos, and truth." -- Kerry Madden, author of the Maggie Valley trilogyPraise for Millicent Min, Girl Genius"An utterly charming debut, as well as being the kind of tour de force that leaves one breathless." -- Boston Globe*"[A] heartfelt story full of wit." -- Publishers Weekly, starred review"Funny, charming, and heartwarming, with something to say about the virtues of trust and truth telling, this deserves an A." -- Kirkus Reviews