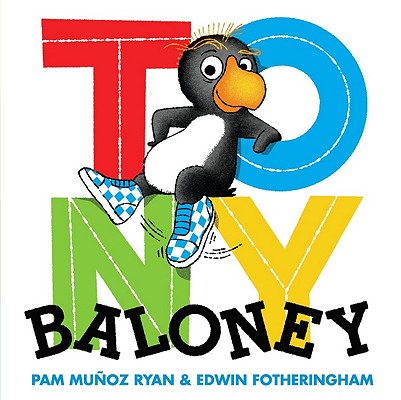 Bestselling author Pam Muñoz Ryan and virtuosic new talent Edwin Fotheringham show off their funny sides as they introduce the mischievous, lovable, utterly relatable Tony Baloney!
Tony Baloney is a macaroni penguin. He loves fish tacos, Little Green Walrus Guys, his stuffed animal, Dandelion, and anything with wheels. He does not love trouble . . . but trouble loves him. Sometimes, when he is tired of Bossy Big Sister Baloney and exasperated with the Bothersome Babies Baloney, Dandelion behaves badly. And then, Tony must say he is sorry, which is not always easy for him.

Whether you are a mischievous middle, a bossy biggest, or a bothersome baby, you are sure to root for Tony Baloney and find yourself, or someone you love, in the Baloney family.

"The trials and tribulations of middle children get zesty, energetic treatment in this story of a macaroni penguin chick..." -- THE HORN BOOK

"Not only does the story simply and accurately capture the dynamics of family life, the bright, colorful illustrations create memorable characters and vivid scenes. Tony will definitely be a favorite with readers. He is bound to become an enduring character poised to experience many more adventures." -- LIBRARY MEDIA CONNECTION

Pam Muñoz Ryan is the recipient of the Newbery Honor Medal and the Kirkus Prize for her New York Times bestselling novel, Echo, as well as the NEA's Human and Civil Rights Award and the Virginia Hamilton Literary Award for multicultural literature for her body of work. Her celebrated novels, Echo, Esperanza Rising, The Dreamer, Riding Freedom, Becoming Naomi Léon, and Paint the Wind, have received countless accolades, among them two Pura Belpré Awards, a NAPPA Gold Award, a Jane Addams Children's Book Award, and two Américas Awards. Her acclaimed picture books include Amelia and Eleanor Go for a Ride and When Marian Sang, both illustrated by Brian Selznick, and Tony Baloney, illustrated by Edwin Fotheringham, as well as a beginning reader series featuring Tony Baloney. Ryan lives near San Diego, California, with her family.

Edwin Fotheringham has illustrated numerous widely acclaimed nonfiction picture books such as Barbara Kerley's What to Do About Alice?, a Sibert Honor Book and a Boston Globe-Horn Book Award Honor Book; The Extraordinary Mark Twain (According to Susy), a New York Public Library Best Children's Book; Those Rebels, John & Tom, an NCTE Orbis Pictus Award Honor Book; and A Home For Mr. Emerson, a NAPPA Gold Award winner; as well as younger fiction picture books, such as Pam Muñoz Ryan's Tony Baloney and the eponymous beginning reader series; and Jennifer Hamburg's Monkey and Duck Quack Up!, a spring 2015 Indie Favorite Book. Ed lives in Seattle, Washington. Visit him at edfotheringham.com.
Loading...
or
Not Currently Available for Direct Purchase