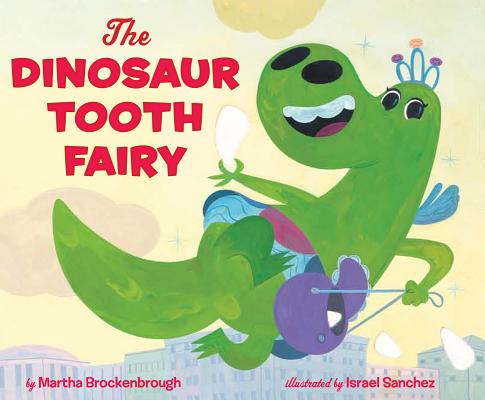 The Dinosaur Tooth Fairy lives in the Museum, where she polishes her giant tooth collection and remembers the good old days. But when a little girl with a loose tooth walks through with her class, the D.T.F. knows she wants it, wants it, WANTS it! The thing is, the world has changed quite a lot since the D.T.F. was out and about -- there are doorknobs, slobbering dogs, and school buses to worry about now. Not to mention a mysterious Tooth Fairy rival who might just sweep in and ruin everything!

Here is a story about loose teeth, heart's desires and -- in the end -- friendship, that is both laugh-out-loud funny and unexpectedly touching. This is the T-Rex of tooth fairy books. (Or maybe the most magical tooth fairy of dinosaur books?) Read it and teethe.

Martha Brockenbrough is the author of two books for adults and five books for young readers, including The Game of Love and Death, which earned four starred reviews and was a Kirkus Prize finalist, Devine Intervention, and The Dinosaur Tooth Fairy. She lives in Seattle, Washington, with her husband and their two daughters. Visit her online at marthabrockenbrough.com.

Israel Sanchez lives in La Habra, California. His illustrations and comics have been featured in Nickelodeon Magazine and Flight Comics, and he has done character and background design for Titmouse Animation. THE DINOSAUR TOOTH FAIRY is his first picture book.
or
Not Currently Available for Direct Purchase