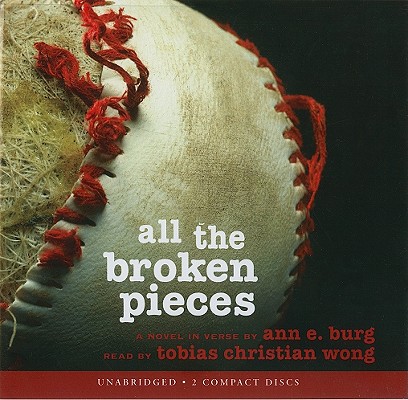 A remarkable literary debut by a stunning new voice in children's fiction.Format: 2 CDs, UnabridgedNarrator: Tobias Christian WongNarrator: TBATwo years after being airlifted out of war-torn Vietnam, Matt Pin is haunted: by bombs that fell like dead crows, by the family -- and the terrible secret -- he left behind. Now, inside a caring adoptive home in the United States, a series of profound events force him to choose between silence and candor, blame and forgiveness, fear and freedom.By turns harrowing, dreamlike, sad, and triumphant, this searing debut novel, told in lucid verse, reveals an unforgettable perspective on the lasting impact of war and the healing power of love.

Ann Burg's debut novel, All the Broken Pieces, was named an ALA Best Book for Young Adults, a Jefferson Cup award winner and an IRA Notable Book for a Global Society, among its many honors. Her follow-up, Serafina's Promise, was named an ALA Notable, a Parents' Choice Gold Award Winner, and an NAACP Image Award finalist. Her latest novel, Unbound, was the winner of the New-York Historical Society Children's History Book Prize and the Christopher Award, among other distinctions. Burg worked as an English teacher for ten years before becoming a full-time writer. She lives in Rhinebeck, New York, with her family. Visit her online at annburg.com.
Loading...
or
Not Currently Available for Direct Purchase