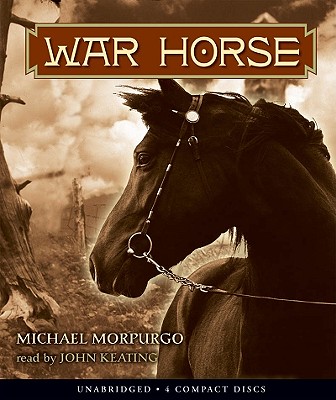 A powerful tale of war, redemption, and a hero's journey.

Format: 4 CDs, Unabridged
Narrator: TBA
In 1914, Joey, a beautiful bay-red foal with a distinctive cross on his nose, is sold to the army and thrust into the midst of the war on the Western Front. With his officer, he charges toward the enemy, witnessing the horror of the battles in France. But even in the desolation of the trenches, Joey's courage touches the soldiers around him and he is able to find warmth and hope. But his heart aches for Albert, the farmer's son he left behind. Will he ever see his true master again?

Michael Morpurgo, former Children's Laureate of Britain, is the author of War Horse, called "Superb" by the New York Times Book Review, and now a major motion picture. His other prize-winning books include Kensuke's Kingdom, Private Peaceful, and The Amazing Story of Adolphus Tips. Michael lives in England, with his wife, Clare. Together, they founded the charity Farms for City Children, which gives children from urban areas an opportunity to spend a week working on a farm. Learn more at michaelmorpurgo.org.
Loading...
or
Not Currently Available for Direct Purchase