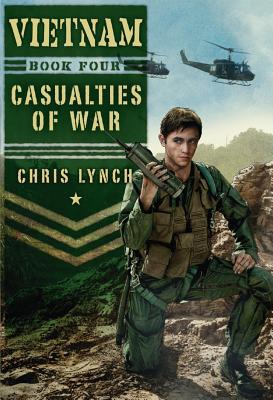 Morris, Rudi, Ivan, and Beck are best friends for life. So when one of the teens is drafted into the Vietnam War, the others sign up, too. Although they each serve in a different branch, they are fighting the war together -- and they promise to do all they can to come home together.
Of the four, it's Beck that has the most to lose. He's the smart one of the bunch, and he could be -- SHOULD be -- going to college. His parents certainly think so. But he has a pact to honor, and so Beck enlists in the US Air Force.
As their tours of duty near completion and the war itself spirals further out of control, the four best friends are at last on a collision course. Will they all survive long enough to be reunited?


Praise For Casualties of War…

Praise for Vietnam #1: I Pledge Allegiance:

"With a fine balance of thoughtfulness and gritty action, this initial series entry should readily attract a host of loyal fans." - Bulletin of the Center for Children's Books

"Lynch offers something valuable: a very good war novel for a preteen and middle-school audience, with enough violence to be an honest portrayal of war, but without the sex and rough language that often keep such novels out of the hands of a ready audience. . . . Young readers will eagerly anticipate future installments in the series." - Kirkus Reviews

Chris Lynch is the author of numerous acclaimed books for middle-grade and teen readers, including the Cyberia series and the National Book Award finalist INEXCUSABLE. He teaches in the Lesley University creative writing MFA program, and divides his time between Massachusetts and Scotland.
Loading...
or
Not Currently Available for Direct Purchase