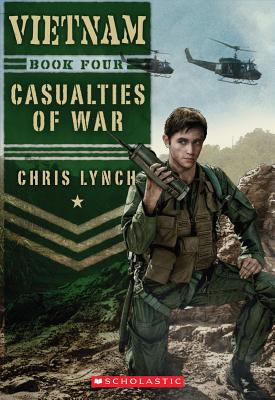 "The best Vietnam War novels yet for this age range." - KIRKUS REVIEWS

When his three best friends go to Vietnam, Beck knows he must honor his promise to go with them. He enlists in the US Air Force, where he's able to work as a mechanic, learning about planes and choppers and supersonic jets. He's also able to view the war from above, where he can admire the savage beauty of the jungle at a distance.

Beck thinks he has it all figured out. But when his tour of duty takes a turn for the worse, one thing becomes clear: Beck still has a lot to learn about war, and about friendship, too.

Praise For Vietnam #4: Casualties of War…

* "An expertly crafted war story with fluid prose, bleak humor, careful attention to historic detail, and a view of 'The Good War' worth pondering." -- Bulletin of the Center for Children's Books, starred review

"All the sizzle, chaos, noise and scariness of war is clay in the hands of ace storyteller Lynch." -- Kirkus Reviews

"Though aimed at younger readers, Lynch doesn't write down, instead offering a powerful taste of war on a personal level." -- Publishers Weekly

"The best Vietnam War novels yet for this age range." -- Kirkus Reviews

"A fine balance of thoughtfulness and gritty action." -- Bulletin of the Center for Children's Books

Chris Lynch is the author of numerous acclaimed books for middle-grade and teen readers, including the Cyberia series and the National Book Award finalist INEXCUSABLE. He teaches in the Lesley University creative writing MFA program, and divides his time between Massachusetts and Scotland.
Loading...
or
Not Currently Available for Direct Purchase