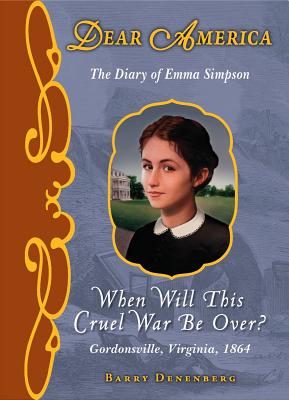 When Will This Cruel War Be Over?

Acclaimed author Barry Denenberg's WHEN WILL THIS CRUEL WAR BE OVER? is now back in print with a gorgeous new package!

The peaceful, traditional Southern life that Emma Simpson and her family know is shattered when the Civil War reaches their soil. Soon, Emma's father and brother are called to battle, but her family is confident the South will quickly win the War between the States.

As the months drag on, though, the harsh realities of war set in. Death and hardship are all around Emma, and food, medicine, firewood, and ink for her to write in her diary become increasingly scarce as troops from the North march deeper into the South. Finally, even her home is commandeered by the Yankees.

Still, with a brave spirit and the knowledge of what is most important, Emma never loses hope that the war will end.

Praise For Dear America: When Will This Cruel War Be Over?…

PRAISE FOR DEAR AMERICA:
"More than a supplement to classroom textbooks, this series is an imaginative, solid entre into American history." --PUBLISHERS WEEKLY

"An impressive series that will challenge students to make connections from prominent historical events to relevant life situations . . . A wonderful asset to the classroom as well as to home libraries." --CHILDREN'S BOOK REVIEW SERVICE

"The Dear America diaries represent the best of historical fiction for any age." --CHICAGO TRIBUNE

Barry Denenberg is a critically acclaimed author of nonfiction and historical fiction. His historical fiction books include titles in the Dear America, My Name Is America, and Royal Diaries series, many of which have been named NCSS/CBC Notable Social Studies Trade Books for Young People. His nonfiction books have covered a wide array of topics, from Anne Frank to Elvis Presley.

Barry Denenberg lives in Bedford, New York, with his wife and daughter.
Loading...
or
Not Currently Available for Direct Purchase