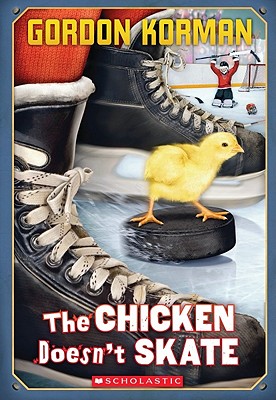 What do a scientist, a screenwriter, and a hockey team all have in common?
A chicken!

Milo has a problem. He's trying to do a project on the food chain, so he charts the growth of a baby chick, and makes arrangements to serve his specimen to the judges at the science fair. But he's baffled by the rest of his class. They name the chick Henrietta. They sign up to take her home on weekends. They claim that she's a good luck charm, a friend, even the new hockey team mascot!

Milo just wants to win the science fair to impress his dad. But when the class finds out that Henrietta will be cooked and eaten for Milo's project, everyone panics!


Praise For The Chicken Doesn't Skate…

Gordon Korman is the author of The 39 Clues Book 2: One False Note, which debuted at #1 on the New York Times bestseller list, and The 39 Clues Book #8: The Emperor's Code. Gordon has written more than sixty books for kids and young adults, including Zoobreak, Swindle, and Son of the Mob, as well as the On the Run series and the Island, Everest, Dive, and Kidnapped trilogies. A native of Ontario, Canada, Korman now lives with his family in Long Island, New York.
or
Not Currently Available for Direct Purchase