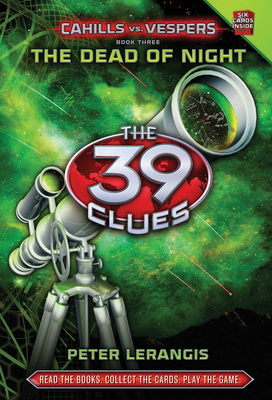 The Dead of Night (The 39 Clues

The third book in the CAHILLS VS. VESPERS series, the follow up to the worldwide bestseller THE 39 CLUES.The Vespers have crossed a line. Amy and Dan were devastated when the Vespers kidnapped seven Cahills around the world, holding them hostage until Amy and Dan delivered an impossible ransom. But at least the hostages were Cahills - members of the world's most powerful family, trained to face all odds.Now the Vespers have gone too far. They've kidnapped Atticus, an innocent 11 year old boy and Dan's only friend. Now Dan and Amy are in the struggle of their lives. Because if they can't outwit the Vespers, the unthinkable will happen . . . Atticus will die.

Peter Lerangis is the author of The Sword Thief and The Viper's Nest, Books 3 and 7 in the bestselling multi-media adventure series The 39 Clues. He has written more than 150 books for young readers in many different genres. He's also a Broadway musical theater actor/singer, a marathon runner, and a father of two sons. He currently lives in New York City.
Loading...
or
Not Currently Available for Direct Purchase