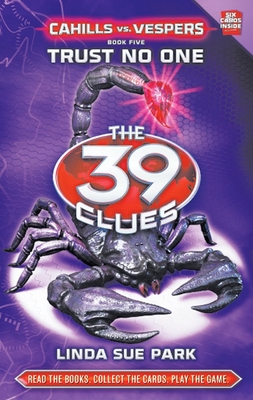 The Trust No One (The 39 Clues

When seven members of their family were kidnapped, thirteen-year-old Dan Cahill and his older sister, Amy, got ready for the fight of their lives. But their enemy, a terrifying group known as the Vespers, remained frustratingly elusive. They stay in the shadows, picking off Cahills one by one.

And now the Vespers have landed their most serious blow yet - a blow that strikes at the very heart of the Cahill family. Because Amy and Dan discover that there's a Vesper mole in their innermost circle. Amy and Dan need to smoke out the traitor before the next hostage dies. They have just days to discover who has their back . . . and who wants to sink a knife into it.

Praise for The 39 Clues

"This is a multi-media adventure where you also search for clues-in books, trading cards and online. Get searching!" -Girls' Life

Linda Sue Park became a professional writer when she published her first poem at age nine. She went on to become a journalist, a food critic, and an English teacher, but Park did not test her hand at writing fiction until she was in her midthirties, at the same time that she began to explore her Korean heritage in earnest. Her research resulted in a treasure trove of children's books, each of which delves into a different piece of Korean history. In 2002, Park was awarded the Newbery Medal for her third novel, A Single Shard becoming the first Korean American to take home the honor.
Loading...
or support indie stores by buying on