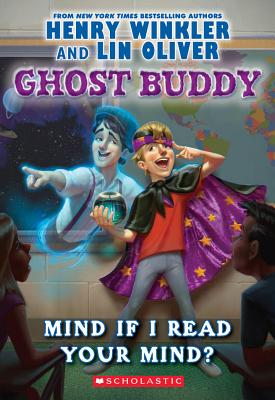 Mind If I Read Your Mind?

Billy and Hoover are back in the hilarious new series from bestselling authors Henry Winkler and Lin Oliver!

It's time for Moorepark Middle School's annual Speak Out Challenge, and Billy Broccoli thinks he's got it made. With his best friend Hoover Porterhouse--the ghost with the most--by his side, Billy's got the competition in the bag. Who wouldn't vote for a demonstration on mind reading?

But when Billy lands a spot on the sixth grade team, he starts spending more time with his new teammates than he does with Hoover. And the Hoove plays second fiddle to no one! If Billy's not careful, his secret weapon might just vanish into thin air, leaving Billy to pick up the pieces of a demonstration day disaster!

HENRY WINKLER is admired by audiences of all ages for his roles as the Fonz on the long-running series, Happy Days, and in such films as Holes and The Waterboy. He is also an award-winning producer and director of family and children's programming, and the author (with Lin Oliver) of the critically-acclaimed Hank Zipzer series. He lives in Los Angeles, California.

Lin Oliver is a television producer and writer and the Executive Director of the Society of Children's Book Writers and Illustrators. She coauthored (with Henry Winkler) the NEW YORK TIMES bestselling middle-grade series HANK ZIPZER: THE WORLD'S GREATEST UNDERACHIEVER, and wrote the series WHO SHRUNK DANIEL FUNK? Lin resides in Los Angeles, California.
Loading...
or
Not Currently Available for Direct Purchase