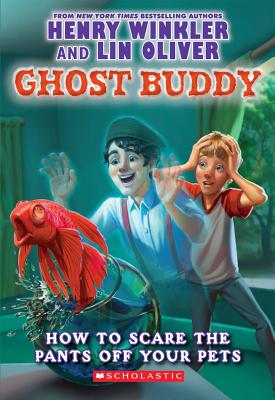 How to Scare the Pants Off Your Pets

Billy and the Hoove are back in the hilarious new series from bestselling authors Henry Winkler and Lin Oliver
When Billy Broccoli finds out his personal ghost, Hoover Porterhouse, is failing Responsibility, Billy decides it's his mission to help Hoover turn his grade around. But how?
Then inspiration hits. Billy is going to get Hoover a pet. There's only one catch--the Hoove scares dogs out of their fur, birds out of their wings, and fish out of their gills. If Billy can't find the perfect pet, how will Hoover ever learn make the grade?


Praise For How to Scare the Pants Off Your Pets…

"This title is chock-full of nuggets that will have the boys cheeringWhat’s more, parents and educators will cheer when Billy stands up to Rod without resorting to bully tactics."
--School Library Journal

"Readers will root for Billy to conquer his klutziness as well as the bully; his final feel-good triumph is satisfying."
--Publishers Weekly

HENRY WINKLER is admired by audiences of all ages for his roles as the Fonz on the long-running series, Happy Days, and in such films as Holes and The Waterboy. He is also an award-winning producer and director of family and children's programming, and the author (with Lin Oliver) of the critically-acclaimed Hank Zipzer series. He lives in Los Angeles, California. Lin Oliver is a television producer and writer and the Executive Director of the Society of Children's Book Writers and Illustrators. She coauthored (with Henry Winkler) the NEW YORK TIMES bestselling middle-grade series HANK ZIPZER: THE WORLD'S GREATEST UNDERACHIEVER, and wrote the series WHO SHRUNK DANIEL FUNK? Lin resides in Los Angeles, California.
Loading...
or
Not Currently Available for Direct Purchase