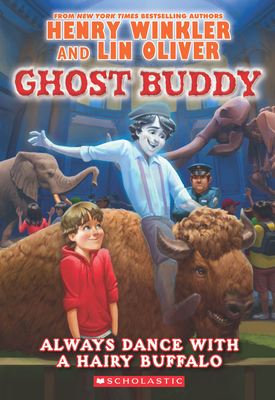 Always Dance with a Hairy Buffalo

Another hilarious adventure for Billy and the Hoove from bestselling authors Henry Winkler and Lin Oliver!

Billy Broccoli is used to getting expert advice--wanted or not--from the ghost with the most, Hoover Porterhouse! The Hoove has smooth moves and a silver tongue...and he isn't shy about sharing his words of wisdom!

But when a night at the museum finds Hoover face-to-face with the ghost of a powerful Chumash Indian princess, his brain turns into mashed potatoes. Now the tables are turned and it's up to Billy to help Hoover find the words he needs to make a new friend.

Praise For Ghost Buddy #4: Always Dance with a Hairy Buffalo…

"This title is chock-full of nuggets that will have the boys cheering...What's more, parents and educators will cheer when Billy stands up to Rod without resorting to bully tactics."
-- SCHOOL LIBRARY JOURNAL

"Readers will root for Billy to conquer his klutziness as well as the bully; his final feel-good triumph is satisfying."
-- PUBLISHERS WEEKLY

HENRY WINKLER is admired by audiences of all ages for his roles as the Fonz on the long-running series, Happy Days, and in such films as Holes and The Waterboy. He is also an award-winning producer and director of family and children's programming, and the author (with Lin Oliver) of the critically-acclaimed Hank Zipzer series. He lives in Los Angeles, California.

Lin Oliver is a television producer and writer and the Executive Director of the Society of Children's Book Writers and Illustrators. She coauthored (with Henry Winkler) the NEW YORK TIMES bestselling middle-grade series HANK ZIPZER: THE WORLD'S GREATEST UNDERACHIEVER, and wrote the series WHO SHRUNK DANIEL FUNK? Lin resides in Los Angeles, California.
or support indie stores by buying on