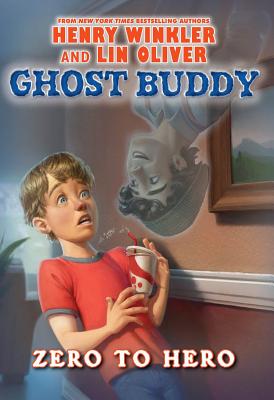 Billy Broccoli is new to the neighborhood, and wants cool friends and a spot on the baseball team more than anything. But the one thing he never wanted is his own personal ghost. So imagine his surprise when he ends up sharing a room with Hoover Porterhouse, a funny ghost with a whole lot of attitude.

When an obnoxious school bully sets out to demolish Billy, the Hoove comes up with a plan for revenge. It’s all in the Hoove’s Rule Number Forty-Two: Stay cool. And like it or not, Billy and the Hoove have to stick together if Billy ever wants to get in style, get even, and conquer the school.

HENRY WINKLER is admired by audiences of all ages for his roles as the Fonz on the long-running series, Happy Days, and in such films as Holes and The Waterboy. He is also an award-winning producer and director of family and children's programming, and the author (with Lin Oliver) of the critically-acclaimed Hank Zipzer series. He lives in Los Angeles, California. Lin Oliver is a television producer and writer and the Executive Director of the Society of Children's Book Writers and Illustrators. She coauthored (with Henry Winkler) the NEW YORK TIMES bestselling middle-grade series HANK ZIPZER: THE WORLD'S GREATEST UNDERACHIEVER, and wrote the series WHO SHRUNK DANIEL FUNK? Lin resides in Los Angeles, California.
Loading...
or
Not Currently Available for Direct Purchase