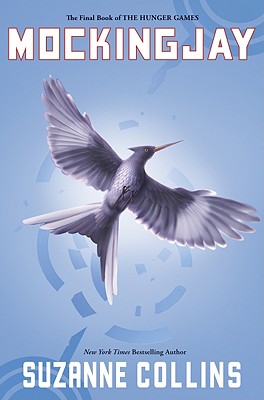 The third book in Suzanne Collins's phenomenal and worldwide bestselling Hunger Games trilogy.
Against all odds, Katniss Everdeen has survived the Hunger Games twice. But now that she's made it out of the bloody arena alive, she's still not safe. The Capitol is angry. The Capitol wants revenge. Who do they think should pay for the unrest? Katniss. And what's worse, President Snow has made it clear that no one else is safe either. Not Katniss's family, not her friends, not the people of District 12.

Powerful and haunting, this thrilling final installment of Suzanne Collins's groundbreaking The Hunger Games trilogy promises to be one of the most talked about books of the year.

"Fans will be happy to hear that Mockingjay is every bit as complex and imaginative as Hunger Games and Catching Fire." - Entertainment Weekly

"At its best the trilogy channels the political passion of 1984, the memorable violence of A Clockwork Orange, the imaginative ambience of The Chronicles of Narnia and the detailed inventiveness of Harry Potter." - New York Times Book Review

"Unfolding in Collins' engaging, intelligent prose and assembled into chapters that end with didn't-see-that-coming cliffhangers, this finale is every bit the pressure cooker of its forebears. [Mockingjay] is nearly as shocking, and certainly every bit as original and thought provoking, as The Hunger Games. Wow." - Los Angeles Times

"This concluding volume in Collins's Hunger Games trilogy accomplishes a rare feat, the last installment being the best yet, a beautifully orchestrated and intelligent novel that succeeds on every level." - Publishers Weekly, starred review

Suzanne Collins is the author of the groundbreaking Hunger Games trilogy for young adults: The Hunger Games, Catching Fire, and Mockingjay. She is also the author of the picture book Year of the Jungle, a Publishers Weekly Best Book of the Year, and the New York Times bestselling Underland Chronicles series for middle-grade readers, which started with Gregor the Overlander. Suzanne lives with her family in Connecticut. You can find her online at suzannecollinsbooks.com.
Loading...
or
Not Currently Available for Direct Purchase