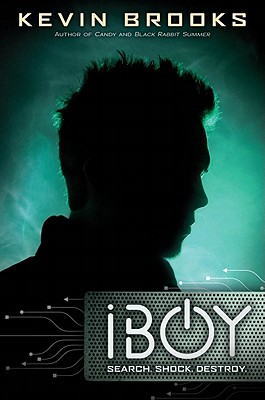 What can he do with his new powers -- and what are they doing to him?

Before the attack, Tom Harvey was just an average teen. But a head-on collision with high technology has turned him into an actualized App. Fragments of a shattered iPhone are embedded in his brain. And they're having an extraordinary effect on his every thought.

Because now Tom knows, sees, and can do more than any normal boy ever could. But with his new powers comes a choice: To avenge Lucy, the girl he loves, will he hunt down the vicious gangsters who hurt her? Will he take the law into his own electric hands and exterminate them from the South London housing projects where, by fear and violence, they rule?

Not even his mental search engine can predict the shocking outcome of iBoy's actions.

A WiFi, WTF thriller by YA master Kevin Brooks.

"Brilliant, harrowing, uplifting...with a passionate truth. If I were a producer, I'd option iBOY immediately. This is the big one. Bravo!" -- Amanda Craig, The Times of London

“This is a heartbreaking story.” – BCCB

“Tense and gritty.” – The Chicago Tribune

BEING:
* “Brooks wraps high-speed, adrenaline-laced adventure around a thought-provoking exploration of the very nature of identity and existence.” -- Publishers Weekly, starred review

“Brooks takes the fantasy of being special...and mines its dark side with grit, compassion, and intrigue.” -- Horn Book

THE ROAD OF THE DEAD:

Kevin Brooks is the groundbreaking author of the internationally acclaimed novels DAWN; BLACK RABBIT SUMMER; BEING; THE ROAD OF THE DEAD, a Mystery Writers of America "Edgar" nominee; CANDY; KISSING THE RAIN; LUCAS; and MARTYN PIG, which received England's Branford Boase Award for Best First Novel. Brooks lives in Yorkshire, England.
Loading...
or
Not Currently Available for Direct Purchase