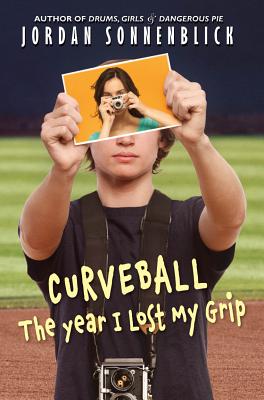 The Year I Lost My Grip

“This is a funny, heart-breaker of a teen sports book that isn't about sports and isn't just for boys. Life is throwing curveballs at Pete. His pitching arm is gone but he won't admit it to his friends, and his grandpa is acting weird but his mom won't admit it to him. With the help of the grandfather's cameras and an almost-girlfriend in a photography class, Sonnenblick charms us into following Pete as he faces his can't-talk-about fears. Not to be missed!”
— Jeanne Snyder, Books & Books, Coral Gables, FL
View the List

Sometimes, the greatest comebacks take place far away from the ball field.
Meet Peter Friedman, high school freshman. Talented photographer. Former baseball star. When a freakish injury ends his pitching career, Peter has some major things to figure out. Is there life after sports? Why has his grandfather suddenly given him thousands of dollars worth of camera equipment? And is it his imagination, or is the super-hot star of the girls' swim team flirting with him, right in front of the amazing new girl in his photography class? In his new novel, teen author Jordan Sonnenblick performs his usual miraculous feat: exploring deep themes of friendship, romance, family, and tragedy, while still managing to be hilariously funny.

Jordan Sonnenblick is the author of the acclaimed DRUMS, GIRLS, & DANGEROUS PIE, NOTES FROM THE MIDNIGHT DRIVER, ZEN AND THE ART OF FAKING IT, and the sequel to DRUMS called AFTER EVER AFTER. He lives in Bethlehem, Pennsylvania, with his wife and two children.
Loading...
or
Not Currently Available for Direct Purchase