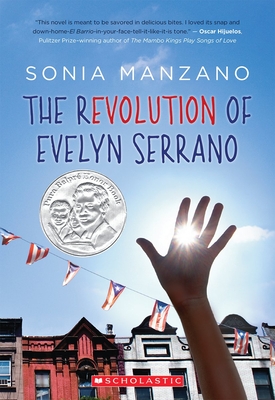 One of America's most influential Hispanics -- 'Maria' on Sesame Street -- presents a powerful novel set in New York's El Barrio in 1969.

There are two secrets Evelyn Serrano is keeping from her Mami and Papo? her true feelings about growing up in her Spanish Harlem neighborhood, and her attitude about Abuela, her sassy grandmother who's come from Puerto Rico to live with them. Then, like an urgent ticking clock, events erupt that change everything. The Young Lords, a Puerto Rican activist group, dump garbage in the street and set it on fire, igniting a powerful protest. When Abuela steps in to take charge, Evelyn is thrust into the action. Tempers flare, loyalties are tested. Through it all, Evelyn learns important truths about her Latino heritage and the history makers who shaped a nation. Infused with actual news accounts from the time period, Sonia Manzano has crafted a gripping work of fiction based on her own life growing up during a fiery, unforgettable time in America, when young Latinos took control of their destinies.

Praise For The Revolution of Evelyn Serrano…

* "This wry, moving debut novel does a great job of blending the personal and the political. . . while the family drama and revelations continue right up to the end."--BOOKLIST, starred review

* "Characters of surprising dimension round out the plot and add to the novel's cultural authenticity. . . A stunning debut."--KIRKUS, starred review


CELEBRITY ENDORSEMENTS
"This novel is meant to be savored in delicious bites. I loved its snap and down-home-EL BARRIO-in-your-face-tell-it-like-it-is tone."--Oscar Hijuelos, Pulitzer Prize-winning author of THE MAMBO KINGS PLAY SONGS OF LOVE

"THE REVOLUTION OF EVELYN SERRANO should be placed on proud display with the literature that enriches our multicultural America. History will come alive for young readers who will identify with how a great historic moment can affect one girl and her family."--Julia Alvarez, Pura Belpré Award-winning author of BEFORE WE WERE FREE and HOW THE GARCIA GIRLS LOST THEIR ACCENTS

"I love this book! It's smart, real, painfully funny, and filled with the wisdom of a writer who can get to the hearts and souls of her readers. Sonia Manzano, standing ovation! (Encore, please!)"--John Leguizamo, Emmy Award winning actor-comedian.

Sonia Manzano has affected the lives of millions since the early 1970s, as the actress who defined the role of "Maria" on the acclaimed television series Sesame Street. Sonia has won fifteen Emmy Awards for her television writing and is the recipient of a Lifetime Achievement Award from the Academy of Arts and Sciences. People magazine named Sonia one of America’s most influential Hispanics. This is Sonia’s first novel. She lives in New York City.
Loading...
or support indie stores by buying on