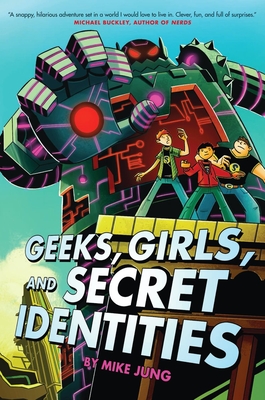 A SUPER funny, SUPER fast-paced, SUPER debut!
Can knowing the most superhero trivia in the whole school be considered a superpower?

If so, Vincent Wu is invincible.

If not (and let's face it, it's "not"), then Vincent and his pals Max and George don't get any props for being the leaders (and, well, sole members) of the (unofficial) Captain Stupendous Fan Club.

But what happens when the Captain is hurt in an incident involving BOTH Professor Mayhem and his giant indestructible robot AND (mortifyingly) Polly Winnicott-Lee, the girl Vincent totally has a crush on?

The entire city is in danger, Vincent's parents and his friends aren't safe, the art teacher has disappeared, and talking to Polly is REALLY, REALLY AWKWARD.

Only Vincent Wu has what it takes to save the Captain, overcome Professor Mayhem, rally his friends, and figure out what to say to Polly. But will anyone take him seriously? Seriously. Anyone??

Find out in this action-packed super comedy debut.

Mike Jung is the author of Geeks, Girls, and Secret Identities and contributed to the anthologies Dear Teen Me, Break These Rules, and 59 Reasons to Write. He is a library professional by day, a writer by night, and a semi-competent ukulele player during all the times in between. Mike is proud to be a founding member of the #WeNeedDiverseBooks team. He lives in Oakland, California, with his wife and two young children. Find Mike at mikejung.com.

Mike Maihack is the creator of the Cleopatra in Space series. Book One: Target Practice won a Florida Book Award and was a YALSA Quick Pick for Reluctant Young Adult Readers. He is also the creator of the popular webcomic Cow & Buffalo and has contributed to books like Sensation Comics Featuring Wonder Woman; Parable; Jim Henson's The Storyteller; Cow Boy; Geeks, Girls, and Secret Identities; and Comic Book Tattoo. Mike lives with his wife, two sons, and Siamese cat in Land O' Lakes, Florida. Visit him online at mikemaihack.com.

"Debut author Jung smartly balances adventure and comedy in a story about (unwanted) power and responsibility that pokes fun at superhero conventions along the way (Professor Mayhem, like a true supervillain, takes his time to explain his evil plot in full)...Superhero fans also will appreciate the sly nod to Clark Kent/Superman when the book jacket is removed." -- Publishers Weekly

"With snappy and authentic dialogue, layered plotting, full-on science, and sweet preteen romance, Jung's boisterous debut is a winner. Here's hoping we haven't seen the last of this bunch." -- Booklist

"There is plenty of page-turning action, plenty of snappy dialogue and action sound effects, plenty of middle school drama (and a little romance), plenty of grossness, and plenty of kid superiority over adults. Superhero fans and comic book fans will be eager readers." -- Library Media Connection, Recommended

"This classic fanboy fantasy hits all the right notes as Vincent uses his wits to overcome some pretty formidable odds.... The dialogue is witty, the plotting clever, and the sentiments are right on target for the age group; fans of Cody's Powerless and readers who enjoy stories about superheroes, underdogs, and friendship skirmishes will all find something to like here." -- Bulletin of the Center for Children's Books
or support indie stores by buying on
Copyright © 2020 American Booksellers Association