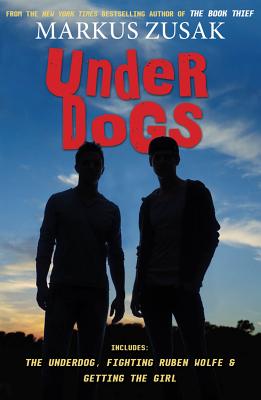 Before The Book Thief, Markus Zusak wrote a trilogy of novels about the Wolfe Brothers: The Underdog, Fighting Rueben Wolfe, and Getting the Girl. Cameron and Ruben Wolfe are champions at getting into fights, coming up with half-baked schemes, and generally disappointing girls, their parents, and their much more motivated older siblings. They're intensely loyal to each other, brothers at their best and at their very worst. But when Cameron falls head over heels for Ruben's girlfriend, the strength of their bond is tested to its breaking point.

We're proud to present these novels together for the first time, and to be introducing American readers to The Underdog, never before published in the United States. Fans of The Book Thief won't want to miss reading the novels that launched Markus Zusak's stellar career.

"Zusak's popularity is well-deserved. He writes emotionally engaging stories with understated humor and a bittersweet style that refuses to play by straightforward grammatical rules. His earliest published works share many of the same stylistic hallmarks and themes of belonging and survival." -- Los Angeles Times

"With this compilation release of The Underdog, the rough-and-tumble adventures of the Wolfe brothers are finally all assembled. Zusak's stunning use of language and rich character development are present, while the introduction of the family framework provides additional understanding for the sibling dynamic in the later stories. . . . Appealing to fans and providing an entry point for fresh readers, this is a much-appreciated addition to the Wolfe brothers' canon." -- Kirkus Reviews

"The Book Thief will be appreciated for Mr. Zusak's audacity, also on display in his earlier I Am the Messenger. It will be widely read and admired because it tells a story in which books become treasures. And because there's no arguing with a sentiment like that.”– New York Times Book Review

“Zusak's first-person narrative is electrifying. . . . Coarse and poetic at the same time, the power of Zusak's prose and vivid imagery will continue to reverberate long after the last punch is thrown.” – Teenreads.com

Praise for Getting the Girl

“The extravagant prose does work well in describing the relationship between Cam and Octavia, demonstrating the often-ignored fact that teenage boys also fall breathlessly and heart-stoppingly in love.” – The Horn Book

Marcus Zusak was born in 1975, the youngest of four children born to German and Austrian immigrant parents. Marcus studied teaching at university and gained experience teaching at the high school level.

Marcus began writing when he was sixteen years old, and completed his first (unpublished) manuscript at eighteen. While his writing may seem most relevant to young adults, he hopes that readers of all ages can discover meaning in his work.