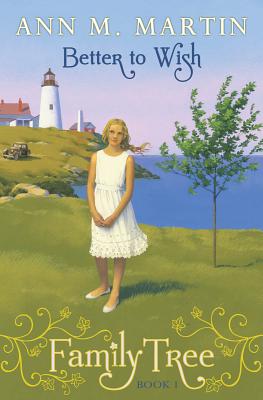 
In 1930, Abby Nichols is eight, and can't imagine what her future holds. The best things today would be having a dime for the fair, keeping her Pops from being angry, and saving up eighty-seven cents to surprise her little sister with a tea set for Christmas.

But Abby's world is changing fast. Soon there will be new siblings to take care of, a new house to move into, and new friends to meet. But there will also be good-byes to say and hard choices to make. As Abby grows older, how will she decide what sort of life will fit her best?

In this incredible new series, bestselling author Ann M. Martin brings the past and the present together one girlhood at a time and shows readers the way a family grows.

Martin (Ten Rules for Living with My Sister) paints an authentic picture of white middle-class life during the 1930s in this first installment of the Family Tree series, tracing four generations of American girls. Growing up in Maine, eight-year-old Abby Nichols is the oldest daughter of an ambitious carpenter eager to realize the American Dream. But his prejudices are strong, too: he won’t let Abby associate with her Irish Catholic neighbor, Orrin, among others. As Abby’s father gains success, she enjoys more privileges, including a big new house in the city, but the family’s newfound prosperity doesn’t ease her outrage over her father’s mistreatment of the less fortunate, including Abby’s mentally impaired baby brother. Besides addressing the subject of bigotry, Martin underscores the powerlessness of wives and children at the time, revealing the positive and negative sides of tight family bonds. Abby grows into a resilient young woman (the novel spans more than 10 years), willing to speaks her mind and assert her independence. Martin incorporates universal themes into this period piece, and her poignant writing is sure to satisfy fans. - Publishers Weekly starred review

Ann M. Martin's The Baby-Sitters Club series sold over 176 million copies and inspired a generation of young readers. Her novels include the Main Street series; BELLE TEAL; the Newbery Honor book A CORNER OF THE UNIVERSE; HERE TODAY; A DOG'S LIFE; and ON CHRISTMAS EVE; as well as the much-loved collaborations P.S. LONGER LETTER LATER; and SNAIL MAIL, NO MORE with Paula Danziger. She lives in upstate New York.
Loading...
or
Not Currently Available for Direct Purchase