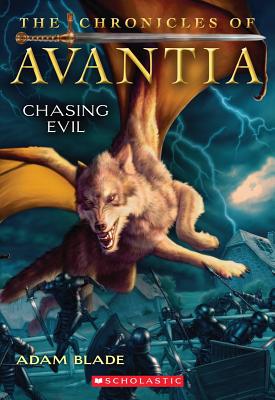 The Chronicles of Avantia #2

Tanner and Gwen are on a quest to protect their homeland from being overtaken by Derthsin's evil army. In order to save Avantia, they must retrieve four parts of an ancient mask, which grants power over all of the Beasts of the land.
After acquiring the first piece of the Mask of Anoret and saving Gwen's twin brother, Geffen, from captivity, Gwen and her Beast, Gulkien, sleep soundly. But Geffen is gone in the morning and he has taken the portion of mask with him. Gwen refuses to believe he has abandoned them but Tanner suspects otherwise. Their search to bring Geffen back leads them to a destroyed village and a new warrior who isn't exactly what he seems to be.

Praise For The Chronicles of Avantia #2: Chasing Evil…

"Readers will be clamoring for the next volumes in this gripping, easy-to-read, high-interest series, which is a terrific introduction to the genre." -Kirkus Reviews

Adam Blade is in his late twenties, and was born in Kent, England. His parents were both history teachers and amateur artists, and Adam grew up surrounded by his father's paintings of historic English battles which left a lifelong mark on his imagination. He was also fascinated by the ancient sword and shield that hung in his father's office. Adam’s father said they were a Blade family heirloom.

Sadly, Adam does not have his own Ice Dragon or Ghost Panther. But he really wishes he did!
Loading...
or
Not Currently Available for Direct Purchase