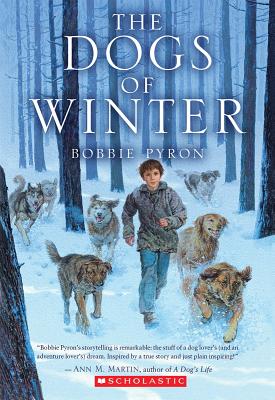 The Dogs of Winter

Now in paperback, the critically acclaimed story of a small boy, a cruel city, and the incredible dogs who save him.

Based on a true story!

When Ivan's mother disappears, he's abandoned on the streets of Moscow, with little chance to make it through the harsh winter. But help comes in an unexpected form: Ivan is adopted by a pack of dogs, and the dogs quickly become more than just his street companions: They become his family. Soon Ivan, who used to love reading fairytales, is practically living in one, as he and his pack roam the city and countryside, using their wits to find food and shelter, dodging danger, begging for coins. But Ivan can't stay hidden from the world of people forever. When help is finally offered to him, will he be able to accept it? Will he even want to?

A heart-pounding tale of survival and a moving look at what makes us human.

Praise For The Dogs of Winter…

Praise for THE DOGS OF WINTER

*"Absorbing... The many vivid details of street life and the convincing portrayals of even minor characters help bring the story to life. A source bibliography is appended. Written with compassion as well as grim, sometimes brutal realism, this novel offers a riveting story as well as material for reflection and discussion." -- BOOKLIST, starred review

"Pyron delivers a reflective, hard-hitting story about the bond between child and dog.... The book's emotional impact is immense." -- PUBLISHERS WEEKLY

Bobbie Pyron is the author of THE DOGS OF WINTER, which received three starred reviews and was named a KIRKUS Best Children's Book of the Year. She grew up in Florida, now lives in Park City, Utah, and works as a librarian in Salt Lake City.
Loading...
or
Not Currently Available for Direct Purchase