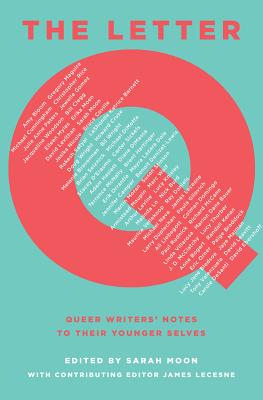 That the boy you were crushing on in History turns out to be gay too, and that you become boyfriends in college? That the bully who is making your life miserable will one day become so insignificant that you won't remember his name until he shows up at your book signing?

In this anthology, sixty-three award-winning authors such as Michael Cunningham, Amy Bloom, Jacqueline Woodson, Gregory Maguire, David Levithan, and Armistead Maupin make imaginative journeys into their pasts, telling their younger selves what they would have liked to know then about their lives as Lesbian, Gay, Bisexual, or Transgendered people. Through stories, in pictures, with bracing honesty, these are words of love and understanding, reasons to hold on for the better future ahead. They will tell you things about your favorite authors that you never knew before. And they will tell you about yourself.

Praise For The Letter Q: Queer Writers' Notes to their Younger Selves…

“The letter Q stands for “queer,” of course, and in this lovely, often funny, and always heartfelt book, more than five dozen celebrated writers send letters to their teenage selves...Though similar in intent to Dan Savage and Terry Miller's It Gets Better (2011), this collection offers its own uniquely personal promise to young readers. In any case, both are books that may save lives and we can never have too many of those.” -- Booklist, starred review

“A thoughtful, humorous, and moving collection of letters and comics… Read together, the letters become a powerful refrain.” -- Publishers Weekly

“With its repeated exhortations to relax more and worry less, this book might be a life-saver for some–and could function as an author list, as well, for teens wanting to read more about People Like Us.” -- Horn Book

Sarah Moon is a teacher, writer, and translator. She lives and works in Brooklyn, New York.

James Lecesne is an actor, writer, and activist. His Academy Award-winning short film, "Trevor," inspired the founding of The Trevor Project (www.thetrevorproject.org).
Loading...
or
Not Currently Available for Direct Purchase