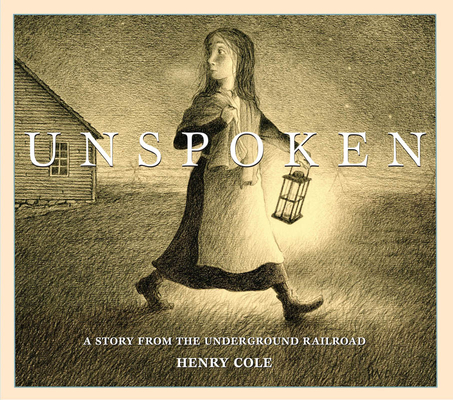 A Story From the Underground Railroad

A young girl's courage is tested in this haunting, wordless story.
When a farm girl discovers a runaway slave
hiding in the barn, she is at once
startled and frightened.

But the stranger's fearful eyes
weigh upon her conscience,
and she must make a difficult choice.
Will she have the courage to help him?

Unspoken gifts of humanity unite the girl
and the runaway as they each face a journey:
one following the North Star,
the other following her heart.

Henry Cole's unusual and original rendering
of the Underground Railroad
speaks directly to our deepest sense
of compassion.

Praise For Unspoken: A Story From the Underground Railroad…

Praise for Unspoken: A Story from the Underground Railroad

"[D]esigned to present youngsters with a moral choice . . . the author, a former teacher, clearly intended Unspoken to be a challenging book, its somber sepia tone drawings establish a mood of foreboding." -The New York Times Book Review

"From the title on, silence and secrets create stirring drama in this wordless picture book . . . children will be moved to return to the images many times and fill in their own words." -Booklist

"What Cole shows so superbly through his accomplished yet unpretentious pencil art-the ideal medium for the book, as it looks as if it's of the era as well as portraying the era-is the keeping of secrets. The entire family appears to know what's going on, but the extent of each character's involvement is never made explicit." -Horn Book

HENRY COLE was a celebrated science teacher for many years before turning his talents to children’s books. He has worked on nearly one hundred and fifty books for children, including Unspoken, Big Bug, A Nest for Celeste, Jack’s Garden, and On Meadowview Street. Henry loves being outside, where he can sketch and write. His favorite sound is the first robin song of the spring. You can visit him online at www.henrycole.net