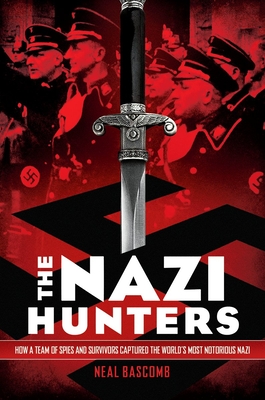 In 1945, at the end of World War II, Adolf Eichmann, the head of operations for the Nazis' Final Solution, walked into the mountains of Germany and vanished from view. Sixteen years later, an elite team of spies captured him at a bus stop in Argentina and smuggled him to Israel, resulting in one of the century's most important trials -- one that cemented the Holocaust in the public imagination.

This is the thrilling and fascinating story of what happened between these two events. Illustrated with powerful photos throughout, impeccably researched, and told with powerful precision, THE NAZI HUNTERS is a can't-miss work of narrative nonfiction for middle-grade and YA readers.

Praise for The Nazi Hunters:

"The Nazi Hunters is a fabulously exciting piece of history that teens should know about -- and now they will! Bascomb's detailed scenes allow readers to live through this true tale of courage and daring as if they were there." -- Deborah Heiligman, Printz Honor-winning author of Charles and Emma and Intentions

"I found The Nazi Hunters riveting, from its suspenseful search for Eichmann to the capture of the war criminal responsible for orchestrating the murder of eleven million people, including six million Jews. Neal Bascomb's book is incredibly well-researched and paced like an espionage thriller. The hunters' commitment to bringing Eichmann to justice is sure to captivate readers." -- Susan Campbell Bartoletti, Newbery Honor-winning author of Hitler Youth: Growing Up in Hitler's Shadow and The Boy Who Dared

"From cafés in Buenos Aires to the halls of the fledgling Israeli government, from false identities to secret drops, this story has all the hallmarks of a spy novel. Bascomb has a knack for turning complex detail into a suspenseful, heart-pounding narrative." -- School Library Journal

"Photographs are included throughout the text, adding not just to the evidence of Eichmann's guilt but to the reader's sense of being along on the mission." -- The Horn Book Magazine

"Tension rises from the pages, thanks to Bascomb's command of pacing, judicious use of quoted material, inclusion of archival photographs and strong descriptions." -- Kirkus Reviews
or support indie stores by buying on
Copyright © 2020 American Booksellers Association