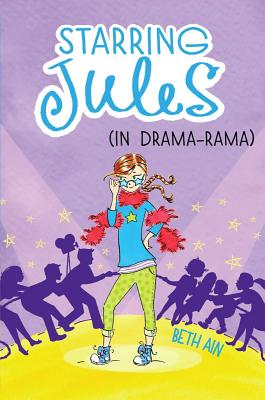 Jules is back starring in another hilarious chapter book!

Things I Didn't Know About Being on TV
by Jules Bloom

1. Shooting a pilot does not mean what you think it means.
2. On TV, people live in mansions and have drivers!
3. You get to completely change who you are, which everyone but me thinks I can do.
4. You might have to miss the moving up play at school, which no one but me cares about.

When Jules lands a role on a new TV show, she gets stuck choosing between taking part in her class moving up ceremony at school and shooting a sitcom. And that's only half the drama!

With a quiet best friend who won't ever hoot and holler and an ex-best friend who may be moving to the burbs, Jules's insides are all mixed-up. She'll need a little bit of nerve and a whole lot of pizzazz if she wants to make it through the last month of second grade without turning into a drama queen!

A Pennsylvania girl at heart, Beth Ain fell in love with life in New York City, and she loves trying to capture the essence of family life there. Thankfully, she now has the benefits of both city and small town life, having settled in Port Washington, NY, where she lives very happily with her husband and their two kids.
Loading...
or
Not Currently Available for Direct Purchase