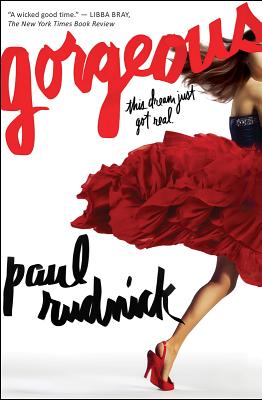 A screamingly defiant, hugely naughty, and impossibly fun free fall past catwalks, red carpets, and even the halls of Buckingham Palace, GORGEOUS is now in paperback!

Eighteen-year-old Becky Randle is an ordinary girl who receives an impossible offer. She meets Tom Kelly, the world's top designer, and he promises to create three dresses to transform her from a nothing-special girl into the Most Beautiful Woman Who Ever Lived.

Becky thinks Tom is a lunatic, or that he's producing a hidden camera show called World's Most Gullible Poor People. But she accepts, and she's remade as Rebecca. When Becky looks in the mirror, she sees herself -- an awkward mess of split ends and cankles. But when anyone else looks at Becky, they see pure five-alarm hotness .

Soon Rebecca is on the cover of Vogue and the new Hollywood darling. Then she meets Prince Gregory, heir to the British throne, and everything starts to crumble. Because Rebecca aside, Becky loves him. But to love her back, Gregory would have to look past the blinding Rebecca to see the real girl inside. And for that, there's not enough magic in the world.

"When I wasn't laughing out loud (which was often), I was wiping away a tiny tear."
- Meg Cabot, bestselling author of The Princess Diaries series

"Paul Rudnick is a champion of truth and love and great wicked humor, whom we ignore at our peril." - David Sedaris, bestselling author of Me Talk Pretty One Day

"[G]leefully wacky and irreverent . . . readers are treated to Rudnick's considerable talents as a satirist as he uproariously eviscerates our celebrity-mad, class-conscious, appearance-obsessed, reality-TV-vapid culture with puckish delight . . . a wicked good time, with moments both outlandish and touching. And as a summer beach read? Well, it's perfect." - Libba Bray, New York Times Book Review

"Paul Rudnick's generous, open heart, scathing wit, encyclopedic knowledge of pop culture and droll humor are all in force in his latest creation, GORGEOUS, which is aptly named. I absolutely adored this book and snort-laughed through the entire thing. You will too." - Melissa de la Cruz, bestselling author of the Blue Bloods series

"Paul Rudnick's young adult debut, "Gorgeous", is not a fairy tale. "Because in real life, fairy tales always end badly." What it is is a satire sharp as a stiletto heel that takes on celebrity culture, the fashion industry, consumerism, and princess stories. Oh, and it's wickedly hilarious." - Boston Globe

"With writing that's hilarious, profane, and profound (often within a single sentence), Rudnick casts a knowing eye on our obsession with fame, brand names, and royalty to create a feel-good story about getting what you want without letting beauty blind you to what's real." - Publishers Weekly, starred review

“Acute, wickedly funny observations on appearance and identity punctuate this sprawling, caustic fairy tale that cheerfully skewers the fashion and film worlds and their celebrity-culture spawn. . . . A Cinderella story with a difference, Becky's journey to reconcile her inner household drudge and outer princess starts where most fairy tales end.” - Kirkus Reviews

Paul Rudnick is a frequent contributer to the NEW YORKER and ENTERTAINMENT WEEKLY, as well as an Obie Award-winning playwright, and the screenwriter for ADDAMS FAMILY VALUES and IN & OUT. This is his first young adult novel.
Loading...
or support indie stores by buying on