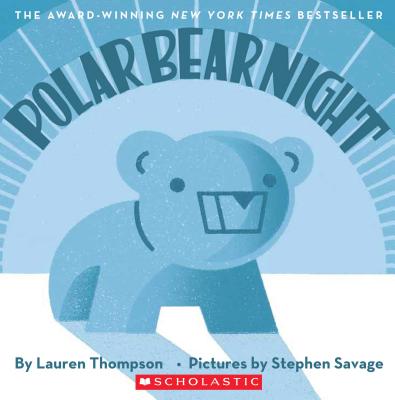 The New York Times Best Illustrated picture book--now in a board edition!

One keen, clear night, a polar bear cub wakes inside her warm den. Something in the moonlit stillness quietly beckons. What is it? The little cub sets out for the snow and sky and sea and ice, and the moon follows.

Praise for the hardcover edition of POLAR BEAR NIGHT:

"Thompson's phrasing emits a fittingly hushed quality and conveys a sense of wide-eyed wonder. Savage's crisp linocuts in a medley of icy bright blues, whites and purples and blacks contribute to a chilly yet soothing nocturnal landscape." --Publishers Weekly STARRED, 11/22/2004.


"The tug of this gentle mystery will draw children into Thompson's simple bedtime story, and the hypnotic ebb and flow of her alliterative lines will keep children immersed...As arresting as Thompson's language are Savage's powerful linocuts, which beautifully reference the textures and forms of Inuit stone carvings and evoke the arctic landscape in a few elemental colors per spread: glacial blues, grays, and sea greens; the pinks and lavenders of the aurora borealis." --Booklist STARRED, 11/15/2004.


"The simplicity in the art, text, and plot belie the deft craftsmanship, like carving an ice sculpture. This bedtime story will captivate young listeners; it sparkles just like ice crystals on a moonlit night."--KIRKUS STARRED, 10/15/04.


"With comforting, carefully chosen words and soft pastels shading linocut prints, this book has all the elements to make it a bedtime favorite. A successful and satisfying combination of adventure and bedtime story." --School Library Journal, 11/1/2004.

Lauren Thompson is the author of several New York Times bestselling children's books, including the much-beloved Little Quack series and the award-winning picture book POLAR BEAR NIGHT. She is also the author of THE APPLE PIE THAT PAPA BAKED and BALLERINA DREAMS: A TRUE STORY. She lives in Brooklyn, New York, with her husband, Robert, and their son, Owen. You can visit her website at www.laurenthompson.net.


Stephen Savage is the New York Times bestselling illustrator of the highly acclaimed and award-winning picture book POLAR BEAR NIGHT, written by Lauren Thompson, as well as the creator of WHERE'S WALRUS? He creates illustrations for a wide range of publications, including The New Yorker, the New York Times, and Newsweek. Stephen lives in Brooklyn, New York, with his wife and their daughter.
Loading...
or
Not Currently Available for Direct Purchase