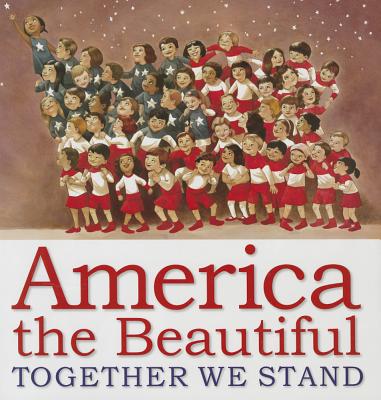 AMERICA THE BEAUTIFUL: TOGETHER WE STAND

Each of our presidents has had a unique vision of America. In AMERICA THE BEAUTIFUL, these ideas are translated into gorgeous illustrations by such top artists as Bryan Collier, Jon J Muth, Diane Goode, Mary GrandPre, Raul Colon, Sonia Lynn Sadler, Yuyi Morales, John Hendrix, LeUyen Pham, and Chris Soentpiet. Each of these talented illustrators has found a unique way to interpret the values and beliefs that have built our great country.

Through moving illustrations, AMERICA THE BEAUTIFUL integrates the lyrics of the familiar patriotic tune with inspiring presidential quotations. AMERICA THE BEAUTIFUL will help teach children about our country's great leaders while highlighting American values such as diversity, unity, and freedom. In addition, the back cover will feature a quote from the winner of the 2012 presidential election.

WHEN I WAS YOUNG IN THE MOUNTAINS, illustrated by Diane Goode, was a Caldecott Honor Book.

Born in Massachusetts in 1859, Katharine Lee Bates was a poet as well as an English professor at Wellesley College. Her poem "America the Beautiful" was inspired by the sights she saw during a trip from Massachusetts to Colorado in 1893.

Bryan Collier loves to paint. He has successfully channeled his creative energy and love of art into an illustrious career as a children's book illustrator and writer. He began painting at the age of fifteen and eventually landed a scholarship to attend Pratt Institute in New York. The Coretta Scott King Awards praised Collier’s work in 2001, 2002, 2003, and 2006, and he has won the Caldecott Honor for DAVE THE POTTER, MARTIN'S BIG WORDS, and ROSA. Bryan lives in New York City.

Mary GrandPré has illustrated more than twenty beautiful books, including The Noisy Paint Box by Barb Rosenstock, which received a Caldecott Honor; Cleonardo, the Little Inventor, of which she is also the author; and the original American editions of all seven Harry Potter novels. Her work has also appeared in the New Yorker, the Atlantic Monthly, and the Wall Street Journal, and her paintings and pastels have been shown in galleries across the United States. Ms. GrandPré lives in Sarasota, Florida, with her family.

LeUyen Pham is the bestselling illustrator of Real Friends by Shannon Hall, The Princess in Black series with Shannon and Dean Hall, the Freckleface series by Julianne Moore, Hats Off to You and Shoe-la-la! by Karen Beaumont, and Grace for President by Kelly DiPucchio, as well as many others. She lives and works in Los Angeles with her husband and her two adorable sons who are best friends. Visit LeUyen at leuyenpham.com.

Diane was born in New York City. Since 1974, she has created the paintings for more than 30 children's books, including the Caldecott Honor Book When I Was Young in the Mountains by Cynthia Rylant.

Her most recent picture book was The Dinosaur's New Clothes (Blue Sky Press, 1999). About it, School Library Journal wrote, "Young readers will delight in Goode's humorous images of the prehistoric giants festooned in extravagant costumes and the dinosaur images peeking down from the gilded moldings of the palace's sumptuous rooms. ... A delightful addition to standard fairy-tale collections." Diane lives with her husband in Wachung, New Jersey, with their two dogs, a yellow Labrador retriever and a Welsh corgi. Their son, Peter, is an artist.
Loading...
or
Not Currently Available for Direct Purchase