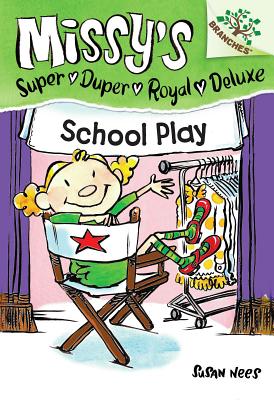 Missy takes to the stage in her latest adventure
This series is part of Scholastic's early chapter book line called Branches, which is aimed at newly independent readers. With easy-to-read text, high-interest content, fast-paced plots, and illustrations on every page, these books will boost reading confidence and stamina. Branches books help readers grow
In the third book in the series, Missy's class is putting on a play about George Washington Carver. Missy, of course, wants to be cast in the best, most exciting part. But Missy doesn't get a main part. She doesn't even get a speaking part. Missy does what she does best though--she turns her part into the most super duper royal deluxe part ever This book features lively full-color illustrations throughout.

Susan Nees graduated with honors from the University of the Arts in Philadelphia. She has also received the American Institute of Graphic Arts Award (AIGA). Her artwork can be found at the Low Library of Columbia University and in special collections at Princeton, as well as in other collections. Susan lives with her husband, her two children, Jodo the Dog, and a small flock of chickens in Georgia. MISSY S SUPER DUPER ROYAL DELUXE is her first children s book series."
Loading...
or
Not Currently Available for Direct Purchase