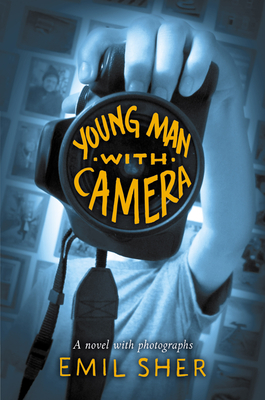 A picture is worth a thousand words -- and with a unique photographic format, a stunning original voice, and a provocative portrayal of bullying, YOUNG MAN WITH CAMERA is a book to get people talking.T-- is used to getting grief. He gets it from his mom, who blames herself for his accident years earlier. He gets it from Mr. Lam, who suspects every kid of stealing from his shop. Worst of all, he gets it from Joined at the Hip, a trio of bullies so vicious that they leave T-- terrified of even using his entire name. But T-- has his own strength too: his camera, which captures the unique way he sees the world. His pictures connect him to Ms. Karamath, the kind librarian at school; his friend Sean, whose passion for mysteries is matched only by his love for his dog; and especially Lucy, a homeless woman who shares his admiration for the photographer Diane Arbus. When Lucy is attacked by Joined at the Hip, T-- documents the assault on film. But the bullies know he has the photographs, and their anger could be deadly. What's the right thing for T-- to do? Do pictures ever tell the whole truth? And what if the truth isn't always the right answer?

Praise For Young Man with Camera…

"Told through prose and photographs, this is a brutal heartbreak of a novel, deservedly just nominated for a Governor-General’s Award…One of the few books for this generation that will stick with them into adulthood..” — Globe and Mail

"Told through prose and photographs, this is a brutal heartbreak of a novel, deservedly just nominated for a Governor-General’s Award…One of the few books for this generation that will stick with them into adulthood..” — Globe and Mail

EMIL SHER writes prose and plays for the young and the once-were-young. His first novel, Young Man with Camera, was published by Scholastic in Fall 2015 and has received numerous awards and honours. Emil is a laureate of the 2014 K.M. Hunter Artist Award in Literature. His picture book Mittens to Share, illustrated by Irene Luxbacher, was published in 2016. Emil has written the stage play adaptations of Hana’s Suitcase by Karen Levine and The Boy in the Moon by Ian Brown, and the script and lyrics for a stage musical of Roch Carrier’s The Hockey Sweater. He was also the writer for The Book of Ashes, inspired by the true story of an Iraqi librarian who saved tens of thousands of books in the midst of war, which premiered at the International Children’s Festival in St. Albert, Alberta, in spring 2016. Emil lives in Toronto, Ontario. Visit him at www.emilsher.com.