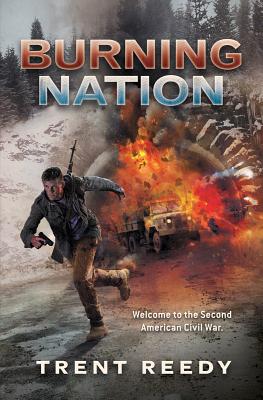 At the end of Divided We Fall, Danny Wright's beloved Idaho had been invaded by the federal government, their electricity shut off, their rights suspended. Danny goes into hiding with his friends in order to remain free. But after the state declares itself a Republic, Idaho rises to fight in a second American Civil War, and Danny is right in the center of the action, running guerrilla missions with his fellow soldiers to break the Federal occupation. Yet what at first seems like a straightforward battle against governmental repression quickly grows more complicated, as more states secede, more people die, and Danny discovers the true nature of some of his new allies.Chilling, powerful, and all too plausible, Burning Nation confirms Trent Reedy's place as a provocative new voice in YA fiction.

Praise for the Divided We Fall Trilogy:
"Divided We Fall delivers cover-to-cover action, intrigue and suspense, all with a gut-punch of an ending that'll leave you begging for the next installment." -- Brad Thor, New York Times bestselling author of The Last Patriot
"Powerful and timely! Trent Reedy's chilling tale hits hard as an ambush. Prepare to lose sleep reading what could be your very near future." -- W.E.B. Griffin & William E. Butterworth IV, New York Times bestselling authors of The Last Witness and Hazardous Duty
"Tense, heart-wrenching, and all too believable -- I can't wait to read more!" -- Tamora Pierce, New York Times bestselling author of Battle Magic
"[A] writer who absolutely must be read. Trent Reedy balances disturbing subject matter with heartfelt insight, and he does it all with great style. Listen closely, because this is an important new voice in YA fiction." -- Jonathan Maberry, New York Times bestselling author of Extinction Machine, Rot & Ruin, and Fire & Ash
* "Reedy tackles pressing issues with prescient clarity and delicate sophistication. His setup is terrifying in its plausibility and made all the more so by Daniel's conflicted everyman nature, with both sides portrayed as sympathetic yet flawed... This cautionary tale screams immediacy and urgency, a page-turner that rapidly moves toward a catastrophic cliffhanger." -- Publishers Weekly, starred review
"An all-too-possible pre-dystopia... Strong characters, a fast-paced narrative, and complex questions about what it means to be an American make Reedy's speculative novel a must-read." -- School Library Journal
"An action-packed thriller that may well lead readers to further explore the complicated constitutional and political issues it raises." -- Kirkus Reviews

Trent Reedy is the author of Divided We Fall, Burning Nation, and The Last Full Measure, a trilogy about the second American Civil War; If You're Reading This; Stealing Air; and Words in the Dust, which was the winner of the Christopher Medal and an Al Roker's Book Club pick on the Today Show. Trent and his family live near Spokane, Washington. Please visit his website at www.trentreedy.com
Loading...
or
Not Currently Available for Direct Purchase