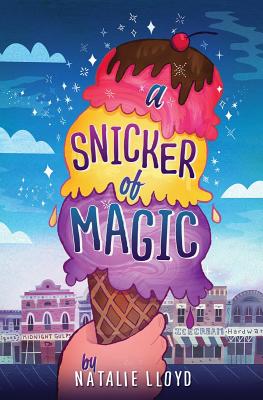 A Snicker of Magic

Introducing an extraordinary new voice---a magical debut that will make your skin tingle, your eyes glisten . . .and your heart sing.Midnight Gulch used to be a magical place, a town where people could sing up thunderstorms and dance up sunflowers. But that was long ago, before a curse drove the magic away. Twelve-year-old Felicity knows all about things like that; her nomadic mother is cursed with a wandering heart.But when she arrives in Midnight Gulch, Felicity thinks her luck's about to change. A "word collector," Felicity sees words everywhere---shining above strangers, tucked into church eves, and tangled up her dog's floppy ears---but Midnight Gulch is the first place she's ever seen the word "home." And then there's Jonah, a mysterious, spiky-haired do-gooder who shimmers with words Felicity's never seen before, words that make Felicity's heart beat a little faster. Felicity wants to stay in Midnight Gulch more than anything, but first, she'll need to figure out how to bring back the magic, breaking the spell that's been cast over the town . . . and her mother's broken heart.

Praise For A Snicker of Magic…

FROM KIRKUS REVIEWS, Starred Review: This tale offers all [the] earmarks of fine storytelling, including colorful, eccentric characters, an original, highly likable narrator and a mighty “spindiddly”plot.FROM PUBLISHERS WEEKLY, Starred Review: From every angle, Lloyd's first novel sparkles and radiates warmth . . . Working in the folksy vein of Ingrid Law's Savvy, Lloyd offers a reassuring, homespun story about self-expression and the magic that resides in one's mind and heart. FROM SCHOOL LIBRARY JOURNAL, Starred Review: A delightful and inspiring debut . . . Mibs Beaumont and her magically gifted clan from Ingrid Law's SAVVY would feel right at home here. As Felicity loves to say, “Yes…yes…yes!"

School Library Journal Starred Review
A delightful and inspiring debut. Mama has a wandering heart, which means that 12-year-old Felicity Pickle and her little sister, Frannie Jo, have wandered along with her in their battered van. But Midnight Gulch feels like home, and not just because it’s where Mama grew up. It’s one of those quirky little towns where there just might be magic. It’s the characters that make this story shine: gruff Aunt Cleo and her tongue-tied swain; Oliver and Ponder, purveyors of unusual ice cream and baked goods, respectively; Jewell Pickett, hair-stylist and auto-mechanic extraordinaire; and her son Jonah, who has the amazing ability to make things better for anybody, despite his own difficulties. And Felicity, who sees words everywhere and uses them in remarkable ways. She’s a girl who loves deeply and openly, and who creates her own kind of magic. Added to these elements are a series of folkloric backstories about feuding brothers, doomed romances, mysterious do-gooders, lost children, and a curse. Mibs Beaumont and her magically gifted clan from Ingrid Law’s Savvy (Dial, 2008) would feel right at home here. As Felicity loves to say, “Yes…yes…yes!”

Publisher's Weekly Starred Review
From every angle, Lloyd’s first novel sparkles and radiates warmth. Felicity Juniper Pickle, 12, feels an immediate kinship with the town of Midnight Gulch, Tenn., the latest place her itinerant mother has brought Felicity, her almost-six-year-old sister, Frannie Jo, and their dog Biscuit. The remote mountain town has a history interwoven with secret magic, but most of it seems to have evaporated years ago following a dual between a pair of famous magician brothers, which divided a family and resulted in a curse. Felicity’s immediate concerns lay with her mother’s sadness and her insistence on constantly uprooting the family. With the help of Felicity’s new friend Jonah, who has his own secret magic that he works on Midnight Gulch; the stories that Felicity collects from various townspeople; and Felicity’s ability to see words that reflect people’s hidden thoughts and desires) she tries to save both the town and her own family. Working in the folksy vein of Ingrid Law’s Savvy, Lloyd offers a reassuring, homespun story about self-expression and the magic that resides in one’s mind and heart.

Natalie Lloyd lives in Chattanooga, Tennessee. She collects old books, listens to bluegrass music, and loves exploring quirky mountain towns with her dog, Biscuit. She is the author of A Snicker of Magic and The Key to Extraordinary.
Loading...
or
Not Currently Available for Direct Purchase