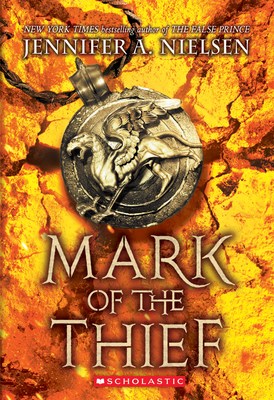 When Nic, a slave in the mines outside of Rome, is forced to enter a sealed cavern containing the lost treasures of Julius Caesar, he finds much more than gold and gemstones: He discovers an ancient bulla, an amulet that belonged to the great Caesar and is filled with a magic once reserved for the Gods -- magic some Romans would kill for.

Now, with the deadly power of the bulla pulsing through his veins, Nic is determined to become free. But instead, he finds himself at the center of a ruthless conspiracy to overthrow the emperor and spark the Praetor War, a battle to destroy Rome from within. Traitors and spies lurk at every turn, each more desperate than the next to use Nic's newfound powers for their own dark purposes.

In a quest to stop the rebellion, save Rome, and secure his own freedom, Nic must harness the magic within himself and defeat the empire's most powerful and savage leaders.

Praise for Mark of the Thief

Praise for the Ascendance Trilogy

"A page-turner." -- The New York Times Book Review
"Sage proves to be a compelling character whose sharp mind and shrewd self-possession will make readers eager to follow him into a sequel." -- Wall Street Journal
"A swashbuckling origin story . . . chock-full of alluring details for adventure-loving boys." -- Los Angeles Times
"An impressive, promising story." -- Publishers Weekly, starred review
"A fast-paced and thrilling read with twists and turns that never let up." -- School Library Journal
"Gripping." -- Kirkus Reviews
"Should appeal to fans of . . . Suzanne Collins. . . . A sure-fire mix of adventure, mystery, and suspense." -- The Horn Book

Jennifer A. Nielsen is the acclaimed author of the New York Times and USA Today bestselling Ascendance Trilogy: The False Prince, The Runaway King, and The Shadow Throne. She also wrote the Mark of the Thief trilogy: Mark of the Thief, Rise of the Wolf, and Wrath of the Storm; the standalone fantasy The Scourge; the historical thriller A Night Divided; and Book Six of the Infinity Ring series, Behind Enemy Lines. Jennifer lives in northern Utah with her husband, their three children, and a perpetually muddy dog.
or support indie stores by buying on