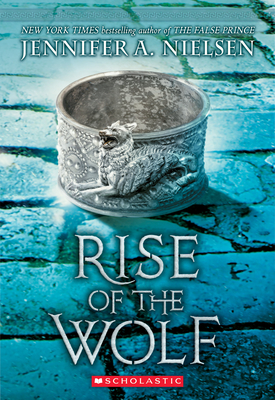 Rise of the Wolf (Mark of the Thief, Book 2)

NYT and USA Today bestselling author Jennifer A. Nielsen brings a new dose of adventure and thrills to ancient Rome in the second book of her magical Mark of the Thief trilogy!
Nic may have escaped enslavement in the mines outside of Rome, but his troubles are far from over. The Praetor War -- the battle to destroy Rome from within -- is in full force, and Nic is caught in the crossfire. The secretive Praetors are determined to unlock a powerful amulet -- one sure to bring the empire to its knees. Worse, the Praetors believe Nic holds the key to finding this amulet, and they will stop at nothing to steal it, even if that means harming the people Nic holds most dear.

When the Praetors capture Nic's mother, Nic knows he must do anything to save her. He challenges the Praetors to a chariot race. If he wins, they will release his mother. But if he loses, he must hand over a magic that will certainly bring about the end of Rome -- as well as his own life. Can Nic once again harness his magic and gather the strength to defeat his enemies? Or will he lose his mother and bear witness to Rome's destruction? Find out in this New York Times bestseller!

Praise For Rise of the Wolf (Mark of the Thief, Book 2)…

"The plot in 'Rise of the Wolf' builds momentum from the beginning and doesn't end with the last page. The book is full of action... keeping readers on their toes to the very end... Jennifer Nielsen does an outstanding job with the first person narration, subtle foreshadowing and wit. Her characters are well-rounded, intelligent and realistic." -- Deseret News
"The world of Rome, treacherous enough in reality, is made more so by the magic Nielsen adds." -- The Salt Lake Tribune

"Should appeal to fans of . . . Suzanne Collins. . . . A sure-fire mix of adventure, mystery, and suspense." -- The Horn Book
Praise for A Night Divided:

Jennifer A. Nielsen is the acclaimed author of the New York Times and USA Today bestselling Ascendance Series: The False Prince, The Runaway King, The Shadow Throne, and The Captive Kingdom, coming in Fall 2020. She also wrote the New York Times bestselling Mark of the Thief trilogy: Mark of the Thief, Rise of the Wolf, and Wrath of the Storm; the stand-alone fantasy The Scourge; the historical thrillers A Night Divided, Resistance, and Words on Fire; the second book in the Horizon series, Deadzone; Book Six of the Infinity Ring series, Behind Enemy Lines; and The Traitor's Game series: The Traitor's Game, The Deceiver's Heart, and The Warrior's Curse. Jennifer lives in northern Utah with her husband, their children, and a perpetually muddy dog.
or support indie stores by buying on