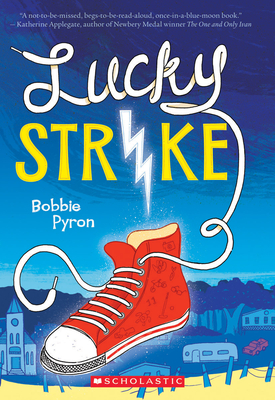 A rich, southern voice tells the unforgettable story of two vulnerable outsiders, the lightning strike that turns their world upside down and the true meaning of lucky.
Nate Harlow would love to be lucky, just once!
He'd like to win a prize, get picked first, call a coin toss right, even! But his best friend, Genesis Beam (aka Gen), believes in science and logic, and she doesn't think for one second that there's such a thing as luck, good or bad. She doesn't care what names the other kids call them. She cares about being right, about saving the turtles of Paradise Beach, and she cares about Nate.
Then, on his birthday, at the Goofy Golf mini-golf course, Nate is struck by lightning -- and survives! Suddenly baseballs are drawn to his bat -- popular kids want HIM on their side. It seems the whole town of Paradise Beach thinks Nate has the magic touch.
But is there room for Gen in Nate's lucky new world?
Lucky Strike tells the unforgettable story of two vulnerable outsiders and what luck is really all about.

Praise for Lucky Strike:
"A not-to-be missed, begs-to-be-read-aloud, once-in-a-blue-moon book." -- Katherine Applegate, author of Newbery Medal winner The One and Only Ivan
"If only every summer could be sprinkled with this kind of magic... This is a lovely storm of a story." -- Natalie Lloyd, author of A Snicker of Magic
"If you're holding Lucky Strike, consider yourself lucky. Open it and read immediately. If you aren't holding it, run now and do so. Open it and read immediately. You will consider yourself lucky. Trust me." -- Barbara O'Connor, author of How to Steal A Dog
*"Characters leap off the pages, adding rich depth to an already satisfying tale... Amusing, endearing and sometimes even electrifying." -- Kirkus Reviews, starred review
*"This well-told story of growth, friendship, and small-town life hits all the right notes." -- School Library Journal, starred review
"A dramatic and sweetly poignant story, enlivened by a dash of magical realism." -- Publishers Weekly
"Filled with Southern charm, a bit of magic, and a cast of quirky characters." -- Voice of Youth Advocates

Praise for The Dogs of Winter:
A Kirkus Reviews Best Children's Book of 2012
"Compelling and highly original fiction... An absorbing account." -- Bulletin of the Center for Children's Books, starred review
"Terrifying, life-affirming and memorable." -- Kirkus Reviews, starred review
"Absorbing...The many vivid details of street life and the convincing portrayals of even minor characters help bring the story to life. A source bibliography is appended. Written with compassion as well as grim, sometimes brutal realism, this novel offers a riveting story as well as material for reflection and discussion." -- Booklist, starred review
"Well-crafted sentences, lively dialogue, and a remarkable story line combine for an absorbing adventure tale that young readers will find irresistible." -- Horn Book
"Pyron delivers a reflective, hard-hitting story about the bond between child and dog...The book's emotional impact is immense." -- Publishers Weekly

Bobbie Pyron is the author of iThe Dogs of Winter/i, which received three starred reviews and was named a iKirkus Reviews/i Best Children's Book of the Year. She grew up in Florida, now lives in Park City, Utah, and works as a librarian in Salt Lake City.
Loading...
or support indie stores by buying on
(This book is on backorder)