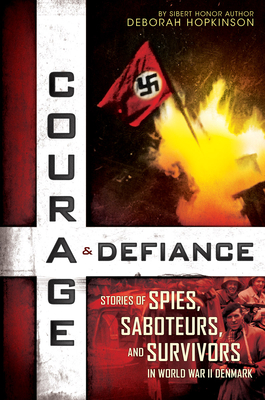 When the Nazis invaded Denmark on Tuesday, April 9, 1940, the people of this tiny country to the north of Germany awoke to a devastating surprise. The government of Denmark surrendered quietly, and the Danes were ordered to go about their daily lives as if nothing had changed. But everything had changed.

Award-winning author Deborah Hopkinson traces the stories of the heroic young men and women who would not stand by as their country was occupied by a dangerous enemy. Rather, they fought back. Some were spies, passing tactical information to the British; some were saboteurs, who aimed to hamper and impede Nazi operations in Denmark; and 95% of the Jewish population of Denmark were survivors, rescued by their fellow countrymen, who had the courage and conscience that drove them to act.

With her talent for digging deep in her research and weaving real voices into her narratives, Hopkinson reveals the thrilling truth behind one of WWII's most daring resistance movements.

Deborah Hopkinson is the acclaimed author of over forty award-winning books, including Shutting Out the Sky, an NCTE Orbis Pictus Honor Book and a Jane Addams Peace Award Honor book; Up Before Daybreak, a Carter G. Woodson Honor Award winner; Titanic: Voices from the Disaster, a YALSA Excellence in Nonfiction Finalist and Sibert Honor book; Courage & Defiance, Stories of Spies, Saboteurs, and Survivors in World War II Denmark, a Sydney Taylor Notable book and Orbis Pictus Recommended title; and Dive! World War II Stories of Sailors & Submarines in the Pacific. Deborah lives with her family near Portland, Oregon.

"With numerous pictures and illustrations accompanying the text, this is a fascinating look at a little-known corner of WWII." -- Publishers Weekly

"[A] spirited, inspiring, and extremely well-researched book... ideal for both classroom use and independent reading." -- Booklist

Praise for Titanic: Voices from the Disaster

"An affecting portrait of human ambition, folly and almost unbearable nobility in the face of death." -- The Wall Street Journal
"A meticulous recounting of the disaster . . . Hopkinson's reporting is so rich with information that it will be equally fascinating to young readers and adults alike."
-- Los Angeles Times
"Hopkinson knows precisely what's she doing in her coverage of the Titanic disaster. . . . [A] fine book." -- The Horn Book, starred review
"Fascinating . . . A thorough and absorbing re-creation of the ill-fated voyage."
-- Kirkus Reviews, starred review
"Riveting." -- Publishers Weekly, starred review
"An absorbing and richly satisfying read." -- School Library Journal, starred review