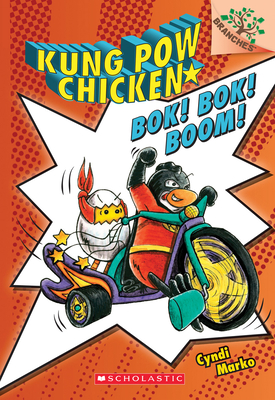 In the second book in this full-color series, Gordon Blue's mom drags him to a night at the opera. The show turns fowl though when its star singer, Honey Comb, is chicknapped! The evil Dr. Screech plans to turn the singer's super-high voice into a supersonic weapon. It's up to Kung Pow Chicken to rescue Honey! Filled with humor and superhero action, this book will keep kids turning the pages.

PPraise for Let's Get Cracking!:

Cyndi Marko is the author-illustrator of the Kung Pow Chicken series (Scholastic, 2014) and This Little Piggy: An Owner's Manual (Simon & Schuster, 2017). She studied Fine Arts at Okanagan University College in Kelowna, BC, where she learned to turn old bicycle parts into works of art, and not much else. From there she went on to Humber College in Toronto, Ontario, to study graphic design and prepress technology. She currently lives in BC and is a moderator of the SCBWI Blueboards.
or support indie stores by buying on