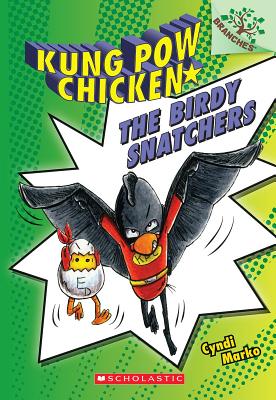 In the third book in this full-color series, Gordon's birdy senses are tingling like crazy! All over the city, chickens are acting strangely. Have they been turned into zombies?! This superhero knows that only a bad guy would steal brains! Kung Pow Chicken is hot on the evil Birdbrain's tail feathers--that is, until an army of zombies birdy-snatches him! What's a superhero to do?

Praise for Let's Get Cracking!:

Cyndi Marko writes and draws books for kids, but she doesn’t mind if adults read them, too. Cyndi is the author and illustrator of the Kung Pow Chicken early chapter book series, This Little Piggy: An Owner’s Manual and Boo! Hiss! early chapter books, and the Sloth Sleuth middle grade graphic novel series. She currently lives in British Columbia, Canada, with her two noisy, freeloading roommates Cathulhu and Salem P. Cat.
Loading...
or
Not Currently Available for Direct Purchase