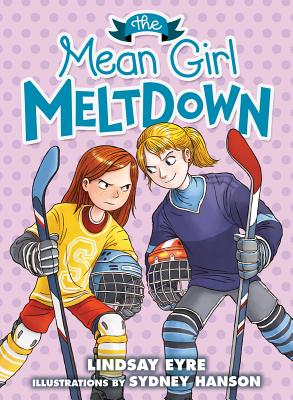 Sylvie Scruggs is finally in fourth grade, and that means she's old enough to join her town's junior ice-hockey team. Sylvie is thrilled to discover her years of skating pay off, as she quickly becomes one of the best players on the squad. But someone else is still better: Jamie Redmond, a fifth-grader who notoriously doesn't like fourth-graders. And, it turns out, she really doesn't like Sylvie.

Then someone starts pranking Sylvie at practice, loosening the top of her water bottle and replacing her special lotion with mayonnaise. Sylvie knows it must be Jamie, trying to psych her out and keep her from being selected as team captain. She enlists her friends Miranda, Josh, and Georgie to prove Jamie's guilt once and for all . . . but can they catch the mean girl before Sylvie has a meltdown of her own?

Praise for the Sylvie Scruggs series:

"Two words: Sylvie Scruggs. Two more words: LOVE HER! Eyre nails it with this new kid on the block. (And here's a challenge: I dare you not to laugh out loud)." -- Barbara O'Connor, author of How to Steal a Dog and The Fantastic Secret of Owen Jester

"Eyre's laugh-out-loud debut novel captures the discovery of the opposite sex in a fun and realistic way, while Santoso's black-and-white artwork brings the personalities of the characters to life. Fans of Junie B. Jones will love the adventures of this heroine as they become engaged in this early chapter book." -- School Library Journal

Lindsay Eyre received an MFA in Creative Writing for Children and Young Adults from the Vermont College of Fine Arts. She now lives with her husband and their five children in the fine and sweaty city of Cary, North Carolina. Please visit her website at www.lindsayeyre.com and follow her on twitter at @lindsayeyre.

Charles Santoso is a concept artist and illustrator who loves to draw very little things in a very little journal. He resides in Sydney, Australia. Please visit his website at www.charlessantoso.com and follow him at @minitreehouse.
Loading...
or
Not Currently Available for Direct Purchase