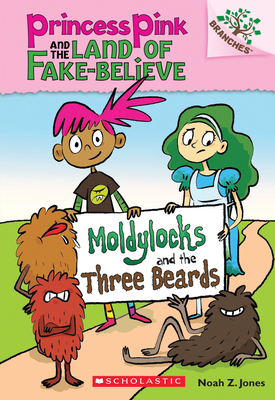 Moldylocks and the Three Beards (Paperback)

Noah Z. Jones turns well-known fairy tales upside-down in this humorous new series!
This series is part of Scholastic's early chapter book line called Branches, which is aimed at newly independent readers. With easy-to-read text, high-interest content, fast-paced plots, and illustrations on every page, these books will boost reading confidence and stamina. Branches books help readers grow!
In the Land of Fake Believe, Princess meets a strange girl named Moldylocks. When Princess's stomach grumbles, Moldylocks takes her to the home of the Three Beards. The girls sit in the Beards' chairs, eat their chili, and jump on their beds. The Three Beards are not happy when they get home--and they are very, very hungry! Will Moldylocks and Princess go into the chili pot? With easy-to-read text and engaging full-color artwork throughout, kids will be drawn right into this very funny land of fractured fairy tales!

Noah Z. Jones is an author, illustrator, and animator who creates all sorts of zany and memorable characters. He has illustrated numerous books for children, including iAlways in Trouble/i, iNot Norman/i, and iThose Shoes/i. He is also the author and illustrator of Princess Pink and the Land of Fake-Believe, an early chapter book series. He lives in California. To see more of his work, visit www.noahzjones.com.

Praise For Moldylocks and the Three Beards: A Branches Book (Princess Pink and the Land of Fake-Believe #1)…

Praise for Moldylocks and the Three Beards:
An Amazon Best Book of 2014 -- Ages 6-8
An Amazon Best Book of the Month, May 2014
*"Jones takes 'The Three Bears' for a dizzy spin in this laff-riot series opener.... Being cast against both genre type and publishers' convention, Princess likes 'dirty sneakers, giant bugs, mud puddles, monster trucks, and cheesy pizza' far more than fairies, princesses or anything pink, and she also (for a wonder) has dark skin in the cartoon illustrations.... Fledgling readers will agree with Princess' bemused comment: 'This Land of Fake-Believe is crazy-cakes!'" -- Kirkus Reviews, starred review
"The story...will have kids guffawing with the silly puns and cheering for the ingenious Princess Pink in this subverted version of the more traditional tale." -- Bulletin of the Center for Children's Books
Praise for Always in Trouble:
"Whimsical cartoon illustrations make Toby's troublesome and dangerous behavior seem humorous and lighthearted, in the same spirit that misbehaving is handled in such stories as David Shannon's No, David! (1998). Children will delight in Toby's antics." -- Booklist
or support indie stores by buying on
Copyright © 2020 American Booksellers Association