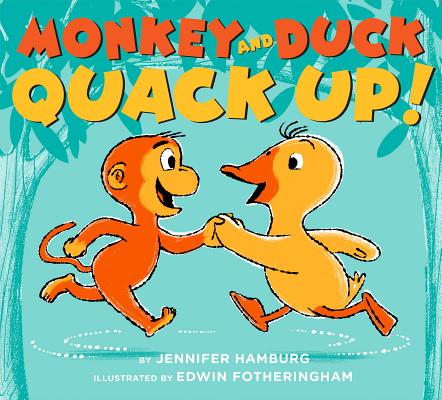 Monkey and Duck Quack Up! (Hardcover)

Together do they have the knack

to be a winning rhyming team

and satisfy a monkey's dream?

Turn the page and try your luck.

See if you can out-rhyme Duck!

Jennifer Hamburg is an Emmy Award-winning children's television writer and story editor whose work can be seen on DOC MCSTUFFINS, HENRY HUGGLEMONSTER, DANIEL TIGER'S NEIGHBORHOOD, SUPER WHY!, LITTLE EINSTEINS, BLUE'S CLUES, and BETWEEN THE LIONS. Her debut picture book A MOOSE THAT SAYS MOO (FSG) was released in October, 2013. Hamburg lives in Austin, Texas. You can visit her online at www.jenniferhamburg.com.

Edwin Fotheringham has illustrated numerous award-winning picture books, including Barbara Kerley's WHAT TO DO ABOUT ALICE?; THE EXTRAORDINARY MARK TWAIN (ACCORDING TO SUSY); THOSE REBELS, JOHN & TOM; and A HOME FOR MR. EMERSON; as well as Shana Corey's MERMAID QUEEN and Pam Muñoz Ryan's TONY BALONEY. Fotheringham lives in Seattle, Washington. You can visit him online at www.edfotheringham.com.

Praise For Monkey and Duck Quack Up!…

Praise for Monkey and Duck Quack Up! :

“With a three-day cruise on the line as a prize, Monkey drafts his friend Duck to participate in a rhyming contest . . . bright bold artwork . . . serious read-aloud potential.” -- Publishers Weekly

“Younger listeners will enjoy completing Monkey's unfinished verses within the story, and slightly older children will be spurred to create their own lists of rhyming words.” -- Booklist

What To Do About Alice? by Barbara Kerley

The Extraordinary Mark Twain (According to Susy) by Barbara Kerley

"Fotheringham's cartoonish drawings hold a retro 'Schoolhouse Rock' appeal in this rousing account of the friendship before the feud." --The New York Times Book Review