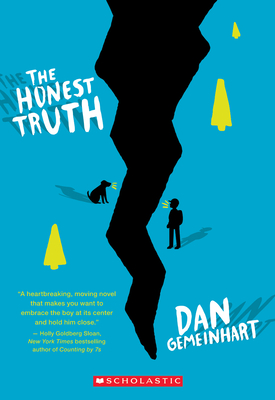 A bold new voice in children's fiction debuts with this story of a boy, his dog, and the mountains they face together.
It's never too late for the adventure of a lifetime.

In all the ways that matter, Mark is a normal kid. He's got a dog named Beau and a best friend, Jessie. He likes to take photos and write haiku poems in his notebook. He dreams of climbing a mountain one day.

So Mark runs away. He leaves home with his camera, his notebook, his dog, and a plan. A plan to reach the top of Mount Rainier. Even if it's the last thing he ever does.

The Honest Truth is a rare and extraordinary novel about big questions, small moments, and one incredible journey.

Praise For The Honest Truth…

"A heartbreaking, moving novel that makes you want to embrace the boy at its center and hold him close." -- Holly Goldberg Sloan, New York Times bestselling author of Counting by 7s

"Debut author Gemeinhart has pulled off an impressive combination of suspenseful adventure thriller and cancer narrative... Touching but unsentimental, this is a deeply moving adventure." -- Booklist

"Writer/librarian Dan Gemeinhart has taken great care to craft a believable and poignant tale of steely resolve and undying friendship. Reluctant readers will especially enjoy the forward-moving adventure, and dog lovers will be thrilled with this truly magnificent tale of "boy loves dog" (and vice versa)... an outstanding debut novel." -- Bookpage

"Gemeinhart... has crafted an extraordinary story about savoring life and exploring the meanings of strength." -- Alaska Airlines Magazine
or support indie stores by buying on
Copyright © 2020 American Booksellers Association