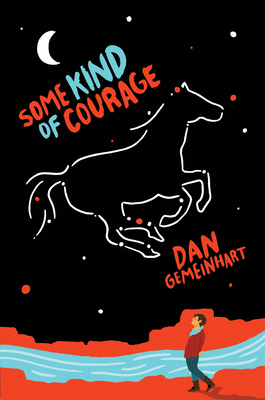 Some Kind of Courage

Saddle up for a life-defining, death-defying adventure.
Joseph Johnson has lost just about everyone he's ever loved. He lost his pa in an accident. He lost his ma and his little sister to sickness. And now, he's lost his pony-fast, fierce, beautiful Sarah, taken away by a man who had no right to take her.

Joseph can sure enough get her back, though. The odds are stacked against him, but he isn't about to give up. He will face down deadly animals, dangerous men, and the fury of nature itself on his quest to be reunited with the only family he has left.

Because Joseph Johnson may have lost just about everything. But he hasn't lost hope. And he hasn't lost the fire in his belly that says he's getting his Sarah back-no matter what.

The critically acclaimed author of The Honest Truth returns with a poignant, hopeful, and action-packed story about hearts that won't be tamed... and spirits that refuse to be broken.

Praise For Some Kind of Courage…

"A heartbreaking, moving novel that makes you want to embrace the boy at its center and hold him close." -- Holly Goldberg Sloan, New York Times bestselling author of Counting by 7s

"Debut author Gemeinhart has pulled off an impressive combination of suspenseful adventure thriller and cancer narrative... Touching but unsentimental, this is a deeply moving adventure." -- Booklist

"Writer/librarian Dan Gemeinhart has taken great care to craft a believable and poignant tale of steely resolve and undying friendship. Reluctant readers will especially enjoy the forward-moving adventure, and dog lovers will be thrilled with this truly magnificent tale of "boy loves dog" (and vice versa)... an outstanding debut novel." -- Bookpage

"Gemeinhart... has crafted an extraordinary story about savoring life and exploring the meanings of strength." -- Alaska Airlines Magazine

Dan Gemeinhart is a teacher-librarian and father of three daughters. His debut novel, The Honest Truth, was a New York Times Editors' Choice selection, an Amazon.com Best Book of the Month, and an Indie Next List pick. His follow-up, Some Kind of Courage, was met with critical acclaim, garnering two starred reviews. Dan lives with his family in Cashmere, Washington. Visit him at dangemeinhart.com.
or support indie stores by buying on