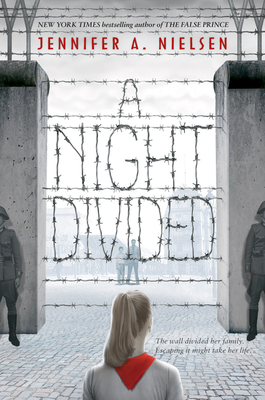 With the rise of the Berlin Wall, twelve-year-old Gerta finds her family suddenly divided. She, her mother, and her brother Fritz live on the eastern side, controlled by the Soviets. Her father and middle brother, who had gone west in search of work, cannot return home. Gerta knows it is dangerous to watch the wall, to think forbidden thoughts of freedom, yet she can't help herself. She sees the East German soldiers with their guns trained on their own citizens; she, her family, her neighbors and friends are prisoners in their own city.

But one day, while on her way to school, Gerta spots her father on a viewing platform on the western side, pantomiming a peculiar dance. Then, when she receives a mysterious drawing, Gerta puts two and two together and concludes that her father wants Gerta and Fritz to tunnel beneath the wall, out of East Berlin. However, if they are caught, the consequences will be deadly. No one can be trusted. Will Gerta and her family find their way to freedom?

Praise For A Night Divided…

"[A]bsorbing and deeply suspenseful, with plenty of ticking-clock tension... an eye-opening glimpse of history." -- Bulletin of the Center for Children's Books

"Distinct supporting characters... demonstrate the harrowing choices people made to survive, encouraging readers to consider what they would have done if fate and history had cast them into the story.... The novel's strong setting and tense climax will keep readers engrossed and holding their breath until the last page." -- School Library Journal


Praise for the Ascendance Trilogy

Jennifer A. Nielsen is the acclaimed author of the New York Times and USA Today bestselling Ascendance Trilogy: The False Prince, The Runaway King, and The Shadow Throne. She also wrote the Mark of the Thief trilogy: Mark of the Thief, Rise of the Wolf, and Wrath of the Storm; the standalone fantasy The Scourge; the historical thriller A Night Divided; and Book Six of the Infinity Ring series, Behind Enemy Lines. Jennifer lives in northern Utah with her husband, their three children, and a perpetually muddy dog.
or support indie stores by buying on