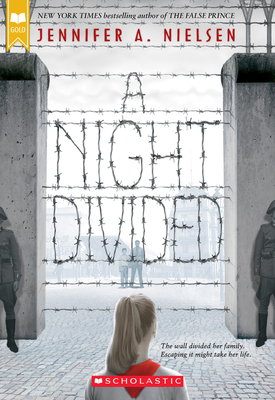 With the rise of the Berlin Wall, Gerta finds her family suddenly divided. She, her mother, and her brother Fritz live on the eastern side, controlled by the Soviets. Her father and middle brother, who had gone west in search of work, cannot return home. Gerta knows it is dangerous to watch the wall, yet she can't help herself. She sees the East German soldiers with their guns trained on their own citizens; she, her family, her neighbors and friends are prisoners in their own city.

But one day on her way to school, Gerta spots her father on a viewing platform on the western side, pantomiming a peculiar dance. Gerta concludes that her father wants her and Fritz to tunnel beneath the wall, out of East Berlin. However, if they are caught, the consequences will be deadly. No one can be trusted. Will Gerta and her family find their way to freedom?

Jennifer A. Nielsen is the acclaimed author of the New York Times and USA Today bestselling Ascendance Trilogy: The False Prince, The Runaway King, and The Shadow Throne. She also wrote the New York Times bestselling Mark of the Thief trilogy: Mark of the Thief, Rise of the Wolf, and Wrath of the Storm; the stand-alone fantasy The Scourge; the historical thriller A Night Divided; the second book in the Horizon series, Deadzone; Book Six of the Infinity Ring series, Behind Enemy Lines; and The Traitor's Game, the first book in a series of the same name. Jennifer lives in northern Utah with her husband, their three children, and a perpetually muddy dog.

"A marvelously crafted historical novel about courage, perseverance and the will to survive, A Night Divided excels in every regard." -- The Reading Eagle

"A fast-paced and thrilling read with twists and turns that never let up." -- School Library Journal
"Gripping." -- Kirkus Reviews

"Should appeal to fans of... Suzanne Collins... A sure-fire mix of adventure, mystery, and suspense." -- The Horn Book
or
Buy Here
Copyright © 2020 American Booksellers Association